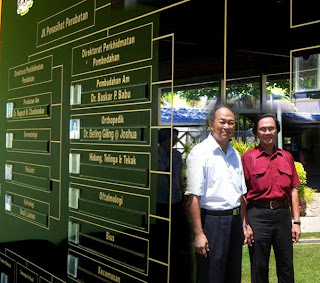 VISIT….Hiew and Edward at the Labuan General Hospital. Signboard show lack of doctor.

THE Kota Kinabalu Member of Parliament Hiew King Cheu with the Sabah DAP vice chairman Edward Ewol Mujie accompanied by the members from the Labuan DAP branch visited the Labuan General Hospital on the 15th of February.

They were told that the hospital is very lack of doctors and medical equipments. This was confirmed during the walk about conducted by the KK MP. The organization chart on the front of the hospital administration main office gave clear indication that there are many positions without doctors and even technicians. The administration office was totally empty when the MP walked in looking for assistance.

Hiew was told that the whole big modern Labuan Hospital has only two specialist doctors and a few junior doctors, many of the departments are having problem to fill the positions.

This is in a critical situation now, because many of the serious cases were being transferred to the Kota Kinabalu General Hospital for treatments. The time spent on the long haul transfer is definitely causing more problems to the patients. Furthermore there is limited or no emergency helicopter service to transfer the patient from Labuan to Kota Kinabalu.

The radiology department is in need of more equipment like the CT, MR scanner and other smaller scanner which is needed to save lives. The various critical emergency cases happened in Labuan cannot wait for the patient to be sent to KK for scanning to be done, and it must be carried out immediately in order to allow the doctors to check and diagnose the sickness for treatment.

The Ministry of Health must look into the needs of the Labuan Hospital and to make arrangement for additional specialist doctors and other personnel to reinforce the medical team in the important Labuan Hospital. Hiew said he will talk to the Health Minister Dato’ Liow Tiong Lai about the Labuan case and their need, and seek his immediate attention.

The Labuan folks deserved the same medical care and facilities like those in Kuala Lumpur and other areas in Malaysia. They should not be deprived, being neglected and treated as second citizens by the government. The Labuan folks paid equal taxes like everyone else, all Malaysian are to be treated equally if the so called “1-Malaysia” slogan is going to work.