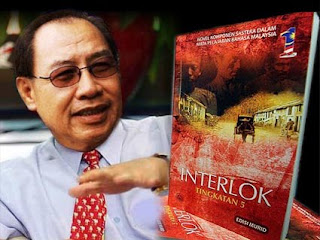 “ANY work of literature which could be deemed to have seditious tendencies should be banned from schools and not form part of the humanities courses as it could potentially be in breach of Sections 3 (1) (d) or 3 (1) (e) of the Sedition Act 1948. In this respect, it is a matter for the Public Prosecutor to raise the matter in court and not for the Education Department to deliberate. Affected communities should raise the matter with the correct authorities,” said Datuk Dr. Jeffrey Kitingan in his press statement.

The United Borneo Front (UBF) leader made further references to the Malay language novel, ‘Interlok’, used in secondary schools as compulsory reading which has raised discontent amongst the Indian community in this country for the inclusion of phrases and terms deemed derogatory by the Indians.

“We have to ask ourselves what literary or historical value is achieved by the study of a work of literature and whether such study could benefit all racial communities in this country, not just sections of these communities. A comprehensive education should be relevant to all but if the Education Ministry promotes works which singles out studies of certain sections of our racial communities, whether based on fact or fiction, the first thing they should ask themselves is whether it would have seditious tendencies which would promote feelings of ill-will or hostility amongst the races in this country. If it’s purely a question of literary artistic merit, then we might as well have Mahathir’s ‘The Malay Dilemma’ in our schools as well!” Dr. Jeffrey said.

Dr. Jeffrey added that authors should have the freedom to write what they want but “we can’t hide from the reality that we have in place the Sedition Act 1948 to control what we say and how we say it.” He added, “Who is at fault? The writer or the protestor?”

The UBF continues to advocate for the total compliance of the principles behind the Commonwealth of Nations and the United Nations to which Malaysia belong and the UBF struggles for the abolishment of all forms of discrimination in this country.

Dr. Jeffrey also said, “The Commonwealth of Nations has a very clear statement on educational standards which says: “We advocate for enhancement of the quality of education and equality of opportunities, for both boys and girls, through improved teaching and management processes. We engage in brokering for the promotion of respect and understanding and social cohesion in the Commonwealth through education.” If the novel does nothing to promote respect, understanding and social cohesion, it is not up to Commonwealth standards for use in our schools.”

The UBF, as a concept, is a civil rights movement and pressure group that will form the Borneo Alliance of political parties, NGOS and individuals in Sabah and Sarawak who subscribe to the Borneo Agenda and the economic and political empowerment of Borneo as equal partners to West Malaysia in the Federation.

UBF similarly pressures the Malaysian government to review laws, contracts, regulations and policies which negatively impacts the political and economic autonomies and development of the Borneo states of Sabah and Sarawak.

About the Founders of UBF

Datuk Dr. Jeffrey Kitingan is a renowned and experienced politician and a political economist by profession, graduating with a Masters degree from the John F. Kennedy School of Government at Harvard University and Masters and PhD degrees from the Fletcher School of Law and Diplomacy at Tufts University in the United States.

He has held high ranking civil service and think tank positions in government, led political parties and spearheaded several corporate organisations and NGOs. He is also the author of several books and academic papers. He has spoken at and organised several forums on politics and economics. He continues to be a popular and charismatic political leader in Malaysia, devoting his life to empowering the political and economic positions of the people of Sabah and Sarawak.

Zainal Ajamain is an economist by profession, graduating with a Masters degree from the University of East Anglia. He has held several high ranking civil service positions in government and government think tanks and has worked as a university lecturer, senior researcher, stockbroker, economist and published several papers in international media journals.

He was the co-author behind the Sabah Government’s vision for development and progress in the Sabah Development Corridor and created the first Offshore Islamic Fund in Labuan. He also held the position of Senior Research Fellow in the Centre for Remote Sensing and Geographic Information Systems at the University Malaysia Sabah.

Nilakrisna James is a lawyer by profession, graduating with a law prize and Bachelors degree from Hull University, a Masters degree from University of London (King’s College) and the Barrister-at-Law in Lincoln’s Inn.

She has worked as a professional lawyer, an executive broadcast journalist, a national anchor newsreader, a public relations and marketing consultant, a newspaper columnist, a director of government bodies focusing on culture, art, tourism and the environment and founded and led several NGO movements pertaining to human and environmental rights.

In 2009, she was given a US State Department scholarship to participate in the International Visitor Leadership Program in the United States focusing on climate change and renewable energy.