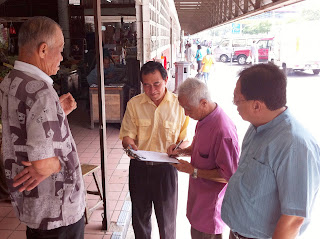 SABAH Progressive Party (SAPP) calls on Malaysians living in Sabah to come out in full force to support its ongoing signature campaign to demand for the Government to set up a Royal commission of Inquiry (RCI), to resolve the perennial illegal immigrants and ‘dubious citizens’ issue.

Urging this was its Api-Api youth chief, Pang Thien Fook stressing that each and every Malaysian regardless of whether they were born in Sabah or not, but so long as they are currently living in Sabah, they should come forward to support the signature campaign for the sake of the sovereignty and future of this country.

He said this is important as the issue had existed for close to three decades now and had adversely affected the politics and socio-economy of Sabah in particular, and Malaysia as a whole.

“It is an undeniable fact that the continuous presence of huge number of ‘dubious citizens’ in the state who are originally illegal immigrants from the neighbouring countries like Philippines and Indonesia who became citizens through dubious means, the infamous ‘Project IC’ especially, had significantly eroded or usurped the rights of the bona fide citizens in many aspects, from politics to socio-economy. Besides, there is also constant danger of the sovereignty and security of this country being compromised at any time,” he pointed out in a statement issued here today.

Pang further stressed that the time has come for all thinking-and-concerned Malaysians to wake up and to come together, to stop the ruling government’s constant abuse and manipulation of the electoral process by using the ‘dubious citizens’ to maintain its current status-quo.

He also believed there could be some basis in the recent accusation made by pro-opposition blogger Abdul Rahman Abdul Taib that Umno aimed to deploy the same modus operandi in Selangor to recapture the opposition Pakatan Rakyat ruled state, as reported by a certain online news portals.

He claimed to have reliably learnt that some of the ‘dubious citizens’ dubbed the ‘fixed deposit’ for Barisan Nasional (BN) have migrated to Peninsular Malaysia.

Pang noted that the said signature campaign was largely prompted by the gross indifference of the Federal government towards the plight of Sabahans over the perennial issue, as demonstrated by the recent statement of the Home Affairs Minister Datuk Seri Hishamuddin Tun Hussein, who said there is no need for the setting up of a Royal commission of Inquiry for the perennial issue.

He continued that the signature campaign which was launched last week is targeting at 100,000 signatures, before it is concluded by end of this March.

As of to-date, SAPP has collected more than 11,000 signatures statewide, both online and on the ground via its mobile service booths conducted in various districts. The petition is available online at: www.petitiononline.com/pati.

Towards this end, Pang reminded Malaysians, Sabahans in particular, of the popular speech by German anti-Nazi activist Pastor Martin Niemöller:

“When the Nazis came for the communists,

I was not a communist.

“When they locked up the social democrats,

I was not a social democrat.

“When they came for the trade unionists,

I did not speak out;

I was not a trade unionist.

“When they came for the Jews,

“When they came for me,

there was no one left to speak out.”

“Let us all do something to stop this “Mother of All Threats” before it’s too late,” urged Pang.