SILENCE IS GOLDEN OR HYPOCRACY? 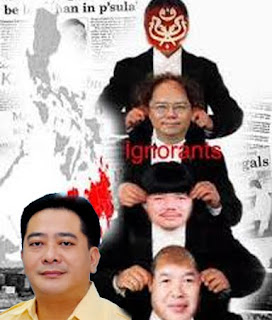 PBS leaders Johnny Mositun and Herbert Timbun Lagadan are so fast to condemn SAPP on every issue. Yet, these same leaders are strangely silent when UMNO’s Home Affairs Minister Dato’ Hishammuddin Hussein declared that there is no need for a Royal Commission in Illegal Immigrants.

Even more suspicious is why up till now, more than two weeks after the so-called installation of a ‘Sultan of Sulu’ in Sabah, has PBS kept their silence on such crucial matters? Is it because ‘silence is golden’ for PBS?

What is so difficult for PBS to make a stand now for a Royal Commission on Illegal Immigrants and the ‘Sulu Sultan’ installation? Is it because of PBS Secretary General’s declaration that PBS is the ‘best friend’ of UMNO? Increasingly, like the famous Atama sketch, PBS has become the stooge or ‘Pak Turut’ of UMNO.

Everybody knows that countless illegal immigrants are getting various types of documents to legalise their stay in Sabah, many even getting MYkads. These are the fixed deposits in the vote bank of BN-UMNO. Herbert is again complaining about the ‘Pulau Gaya voters’.

Does Herbert not know that Pulau Gaya has been within the PBS constituency of Tanjong Aru represented by PBS Vice President Edward Yong Oi Fah ever since 1999?

As for Johnny Mositun’s claim that upon rejoining BN, PBS had submitted a ‘detailed memorandum’ to the then PM, Tun Abdullah Ahmad Badawi, does the question not arise on how long should you wait for concrete actions to be taken?

For the record, SAPP had also submitted a ‘detailed memorandum’ to the same PM. But upon realizing that the Federal government of the day is not serious in tackling the issue, SAPP quit from BN. But PBS leaders, on the other hand, continues to heap praises to the UMNO leaders, even after Datuk Idris Jala’s disclosure that the PTI issue is not listed as a priority, ie not part of the NKRA.

That’s why the people of Sabah think that the leaders of PBS are ‘main wayang’. What’s the point of doing a detailed memorandum and lodging various police reports if you are not really seeking a closure for this issue?

In brushing aside Dr. Chong Eng Leong’s exit from PBS, Johnny Mositun had proudly claimed that PBS is the respected member of the BN. Where is this respect if PBS cannot defend the rights of Sabah natives who used to look up to PBS for protection?

What is PBS doing to save the thousands of natives who are being chased out of their native customary right lands and forest reserves? These poor natives have been abandoned by their leaders. Natives from Tenom and other districts have to resort to court to defend their legal rights.

Some have had their houses and crops burned by the BN government. Some are forced to spend whatever little money they have in defending their freedom after being arrested by the authorities.

This has never happened before in the history of Sabah. As revealed recently by UPKO MP Alliance Siringan Gubat, before September 1998, there was no issue of eviction of natives from their NCRs and forest reserves. But these days, such injustices against natives are common.

If or when the mega dams come to Kaiduan in Papar and Tambotuan in Kota Belud, many Kadazandusun families will be forcibly uprooted from their ancestral homes. Johnny Mositun is from Papar, Herbert from Kota Belud. What can they do except to sing the praises of UMNO? Similarly, what are PBS leaders doing about the marginalization of KDMs in the civil service?

PBS has also allowed itself to be used as tool to divide and rule the people. At the 23rd PBS congress in 2008, PBS gladly hosted the BN Chairman Dato’ Abdullah Badawi to announce that the Bintulu natural gas pipeline to pipe away Sabah’s gas. This was a slap in the face of UPKO President Tan Sri Bernard Dompok who had staked his career on stopping the pipeline.

Eventually, Bernard Dompok had to eat the humble pie because of PBS’s betrayal of unity of the people for Sabah. If not for that act of betrayal, then Sabah would not have to worry about the unavailability of natural gas for our electric power plants, no issue of liquefied natural gas and no issue of shipping LNG to Sandakan.