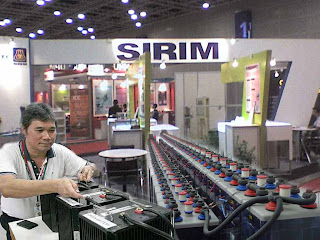 BASE on public query and curiosity in Lead Acid Battery and Lithium Polymer Battery, Sabahkini.net did posses few question regarding that matter to SIRIM Berhad. Below are the questions and answer regarding both matters.

SABAHKINI.NET: Has SIRIM conducted any study on the effects and consequences of lead poisoning?

SIRIM: No, SIRIM has not conducted any study on this subject.

SIRIM: No, SIRIM has not done any testing or approved any Lead Acid Battery for solar power applications.

SABAHKINI.NET: Was there any test conducted to verify the efficiency, life cycle and the effect of DOD (Depth of Discharge) of Lead-Acid battery?

SIRIM: SIRIM’s Advanced Materials Research Centre in Kulim has done several test on lead acid battery based on customer request however the tests are voluntary and not for certification purpose. The batteries were SLI type (battery for starting automotive), and gel type for electric motorcycles application and for electric vehicles (car and buggy) application.

SABAHKINI.NET: Is there a guideline or policy on the disposal of used Lead-Acid battery? If yes, how are those guidelines and policy been enforced especially on traceability of used lead-acid batteries?

SIRIM: Please refer this question to the Department of Environment.

SIRIM: SIRIM, through its Renewable Energy Research Centre has installed one unit, 2KwH of Lithium Polymer Battery pack at Kampung Gontoi, Kota Marudu, Sabah. The green solar powered system project was installed at the village’s Dewan Kebudayaan. The electricity generated are used to power a ceiling fan, a PA system and two units of ceiling lights.

SABAHKINI.NET: Most of the government contracts for solar powered system are meant for remote and interior areas. Hence logistics is a major challenge for such system to be installed in those areas. Is it true that the Lithium-Polymer based solar powered system is only 1/5 of the prorated logistics cost of Lead-acid based system?

SIRIM: It is difficult to say that the prorated logistic cost of Lithium-Polymer based solar powered system is only 1/5 of Lead-acid based system. What is true is for the similar rated energy density, the size and weight for Lithium-Polymer battery is about 1/3 and 1/ 2 of the lead acid battery, respectively.