WHAT THE MAYOR’S NO. 1 PRIORITY SHOULD BE 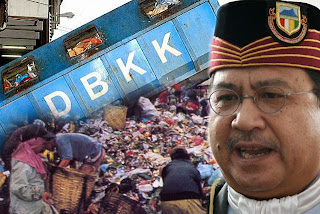 FIRST let me express my sincere congratulations to Datuk Abidin Madingkir for having being appointed to the important post of Mayor of the Sabah state’s capital. I am also heartened by his eagerness to perform well and I believe, not just to be a new broom that sweeps clean, but as a Mayor who will really leave a mark of excellence in his service to the people of the city of Kota Kinabalu.

He had expressed his desire in to solve the city’s perennial traffic problem, keeping the city clean, beautiful and safe, as well as get rid of illegal cigarette sellers – a longstanding problem which has given my hometown, Inanam, the dubious name of the illegal cigarette capital of the West Coast.

Madingkir needs to open a new area of change and raise his performance threshold above and beyond the two past Mayors, so he will be remembered as a pioneer and creator of change that will transform the way DBKK operates for generations to come.

Last Sunday, a local paper dedicated more than one page of comments from people of Kota Kinabalu on what the public wants from the Mayor and they touched on the normal matters of going for green tech, improvement of roads and streetlights, paving and roofing walkways, getting rid of beggars and street kids, adopting stray animals, building more pedestrian bridges and venues for youth and so on.

But they all missed one very important proposal, that is for the new Mayor to create administrative changes within DBKK. In response to Madingkir’s assurance that “My office door will always be open for all. I welcome any suggestion, feedback and views that can bring benefit to all" I would like to make the following suggestions:

DBKK must immediately adopt the full policy for total adherence to procedures, accountability, transparency, meritocracy and openness. City Hall must from now be totally free from corruption and underhanded ways of doing business.

I have been reliably informed by a DBKK insider that there had been certain questionable deals in the awards of projects in City Hall. The insider informs that the land fronting the City Hall on which a hiotel is being built was sold very cheaply below market price whereas if it was sold openly DBKK would have acquired a substantially much higher price for it.

Some building materials, such as steel rods had also supposedly been disposed off at negotiated prices. And in the procedure to award projects there is a long-practiced breech of the usual procedure because DBKK does it by first awarding the projects through negotiation with contractors and only then later requested for the allocation from the state’s Treasury Department.

Proejcts should first be approved, allocated for and only then awarded by open tender. The awarding of procedure prior to allocation is done only in cases of projects to undertake repair after an act of God, such as landslides.

I have also been told that a major building in Karamunsing were totally renovated without first getting any approval from DBKK and only after the renovations were done then negotiation for approval were processed. This of course is against the building by-laws.

So if these information are true, there is a strong case for inquiry and a need to revamp the administrative policy in City Hall. In its official website, DBKK’s mission is stated as “To administer Kota Kinabalu City through professional, transparent and efficient delivery service with a balanced development for the well being of the community.”

Hence, our new Mayor should start a new corporate culture which will be in line with this mission. He should educate the contractors to adopt a more professional, corruption-free approach when they are trying to acquire projects from DBKK. Only then Madingkir will start a ripple effect of change that will put contractors on the alert and to toe the line.

Madingkir must also not bow or bend to the pressures of various groups which want to perpetuate their business or group interests. As we can see, some parts of the city must go, e.g. the Filipino market which is giving the wrong image of Sabah handicrafts. What we need is something like the Central Market in Kuala Lumpur which showcases genuine local arts and crafts.

The first Mayor, Datuk Ghani Rashid is on record for having vowed to get rid of this market but never got to doing it. The new Mayor could lift up the image of the city by getting rid of many of the city’s eyesores. He could also look into solving the longstanding problem of illegal squatters, mainly the Kg. Cenderakasih and Kg. Lembaga Padi the later of which is an open fire hazard and a terribly embarrassing eyesore to the city area. If he can do all these he will create history and carve a record which will be difficult to break for decades to come.