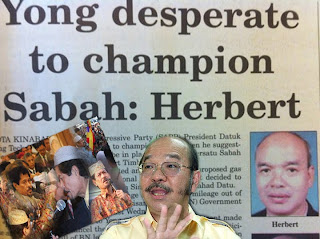 By harping on the official visit of Nur Misuari to Sabah in 1997 when I was Chief Minister, BN government leaders like Herbert Timbun Lagadan and Johnny Mositun have once again exposed their incurable ignorance. As a matter of fact, most of the current BN state and federal ministers were part of the host of Nur Misuari’s visit to Sabah at the time.

The 1997 official visit to Sabah of Nur Misuari as the then governor of the Autonomous Region of Muslim Mindanao (ARMM) was part of the overall programme of the Malaysian and Sabah State governments to resolve the long standing issue of refugees who had fled the civil conflict in the Southern Philippines in the mid 1970s.

These refugees were recognized by the United Nations High Commission on Refugees (UNHCR) office in Kota Kinabalu. Plans were afoot to resettle these refugees, their off springs and illegal immigrants in a peaceful and prosperous Mindanao under the supervision of international bodies. In Malaysia, this came under the National Security Council. In the Philippines, this came under their Southern Philippines Council for Peace and Development (SPCPD) under their President (Ramos).

Malaysia at the time was preaching the ‘Prosper thy neighbor’ and ‘smart partnership’ concepts of our then Prime Minister. BIMP-EAGA (Brunei Indonesia Malaysia Philippines – East ASEAN Growth Area) had just taken off with high hopes and firm commitments from Kuala Lumpur, Jakarta and Manila to bring long lasting harmony, development and prosperity to the neglected peoples of these ‘back yard provinces’ of the three ASEAN member countries.

Earlier, in September 1996, Nur Misuari’s MNLF (Moro National Liberation Front) and the Philippines government had entered into a peace agreement that was recognized by Malaysia, Indonesia and other ASEAN countries, the Organisation of Islamic Conference (OIC) and the international community.

At the time in Sabah, the illegal syndicates manufacturing fake identity cards have been detained under the Internal Security Act, the notorious one being Akjan Ali. Other UMNO operatives, such as Hj. Jabar Khan, and some government officers were also detained under ISA for involvement in fake Ics.

Foreign workers who were legitimately employed were given work passes under the Regularisation Programme. Illegals were deported in huge numbers using the superior logistics and transportation of the Malaysian armed forces. For the first time in many years, there was real hope that the issue of illegal immigrants would be finally resolved. That was thirteen years ago.

Today, we see illegal immigrants and street kids roaming our streets day and night. Crime, drug trafficking and other vices related to illegal immigrant are rampant. Akjan Ali proclaimed himself ‘Sultan of Sulu’ in Sabah right under the noses of our Ministers.

PBS leaders like Tan Sri Joseph Pairin, Herbert, Johnny Mositun and Yee Moh Chai all know that SAPP is not involved in the issuance of fake identity cards to anybody. These same PBS leaders know that the real culprits are operatives associated with UMNO.

Yet, Herbert talked again about the Likas election petition that proved the existence of phantom voters. The allegations were against the Election Commission, not me or SAPP. Evidence of fake ICs and phantom voters given by Dr. Chong Eng Leong in the Likas election petition pinpointed UMNO members, not me or SAPP. Explicitly and clearly, PBS’s own witnesses in the court case said neither me nor SAPP was involved in the IC scam. Names and personalities were exposed in the court, mostly linked to UMNO.

But why is Pairin, Herbert, Johnny Mositun, Yee Moh Chai and PBS leaders silent about UMNO? Why do these PBS leaders continue to falsely attack SAPP on the IC scam, phantom voters and illegals? This is because the PBS leaders want to do UMNO a big favour by covering up for UMNO, and the best way is to distract attention by maliciously blaming an innocent party like SAPP. Such is the power of UMNO over PBS that PBS leaders have become stooges of UMNO.

From Sandakan and Tawau to Putrajaya and Labuan, Mykads are being issued to new immigrants residing in Sabah. Are Pairin, Mositun, Herbert, Yee, and the PBS federal minister in Putrajaya, Dr. Max Ongkili, really blind to these abuses happening under their noses? Or are they pretending not to know?