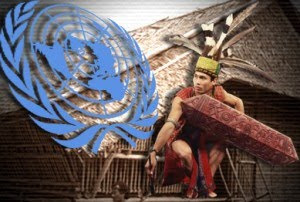 ACTIVISTS from Sabah and Sarawak have lodged an official complaint with the United Nations in Geneva, Switzerland, on April 20 over allegedly widespread and gross human rights abuses and violations in the two Malaysian Borneo states.

The Belgian visit also included a look at the preparations being made within the law by the Flemish-speaking areas in Belgium to secede in the near future.

“We held a public forum in London, to sum up, before returning home,” said Human Rights Foundation Malaysia (HuRiFoM) Advisor Daniel John Jambun from Sabah last night upon his return home. “This will be followed by a trip to Washington in June for another briefing on the worsening human rights situation in Sabah and Sarawak and the European parliament in Sept.”

Jambun was accompanied on his trip by the United Kingdom-based HuRiFoM’s Borneo Director, Kanul Gindol, who is also the organizing secretary for the Common Interest Group Malaysia (CigMA). Jambun is CigMA chair for the 2011-2012 term.

Others who called at the UN together with Jambun and Kanul were London-based Hindraf Makkal Sakthi chair P. Waythamoorthy and the two co-founders of The Sarawak Report website and Radio Free Sarawak, Care Rewcastle Brown and Peter John from Sarawak.

Jambun presented UN representatives with several documents including resolutions passed at a minority rights conference in Kuala Lumpur on Jan 23, a 17-page Sabah paper prepared by him, an executive summary which was also given to the respective parliaments in Amsterdam and Brussels and several pertinent books and reports from Sabah and Sarawak.

The Sabah activists, according to Jambun, petitioned the UN to impress upon the Malaysian Government that “it was imperative to hold a Royal Commission of Inquiry on the presence of 1.7 million illegals in the state”.

“This is the mother of all issues in Sabah,” said Jambun. “Today, the 1.5 million Sabahans have effectively been marginalized and disenfranchised in their own land by the illegal immigrants because the Federal Government chooses to do nothing.”

Jambun warned that the presence of a large number of illegal immigrants in the state cannot be allowed to continue unchallenged as it involved the future and well-being of genuine citizens. These citizens, he stressed, ran the risk of being swamped by the number of illegals with MyKads and entered in the electoral rolls.

“We have to consider that these illegal immigrants are also being allowed to pass off as natives which means that ownership of native customary rights (NCR) lands and the privileges under Article 153 of the Federal Constitution are at extreme risk,” fumed Jambun.

There are specific international laws against a state being complicit in the marginalization and disenfranchisement of its own citizens, he added.

Three other related issues on marginalization and disenfranchisement reportedly brought to the attention of the UN were the gerrymandering of electoral boundaries to reduce the number of non-Muslims seats, Sabah and Sarawak being at a disadvantage in the Malaysian Parliament in terms of representation, and non-Muslim natives being denied Article 153 benefits.

Still on marginalization and disenfranchisement, continued Jambun, “was the snowballing problem of Sabahans denied Malaysian personal documents and living in a legal twilight zone in their own land through no fault of their own”. He reiterated that this was one of the many areas where the Malaysian Government stands accused of being in non-compliance with the 1963 Malaysia Agreement.

Notwithstanding the Malaysian Government’s non-compliance with the 1963 Malaysia Agreement, the Sabah and Sarawak activists want the UN to probe whether the said agreement indeed still exists “given Singapore’s exit from the Federation in 1965”.

“We briefed the UN that life in Sabah and Sarawak were generally better before Malaysia in 1963,” said Jambun. “We are referring to the fact that we did not live in a police state with draconian laws, race relations were excellent and everybody respected the religious rights of others. No race was left out.”

Elsewhere, the Sabah Sarawak activists pointed out that non-Muslims were denied the opportunity to be Governor in their own state and that even the Chief Minister’s post was being denied them through colonial divide-and-rule tactics fostered in the two states by the Federal Government in Putrajaya.

The Federal Government forcibly taking away 95 per cent of the oil and gas revenue from Sabah and Sarawak in the inner waters, and 100 per cent from the outer waters, all other revenue, and the dubious distinction of both states being the poorest states in Malaysia were among other salient points raised in Geneva.

Jambun pledged that HuRiFoM would continue to raise the plight of Sabah and Sarawak in Malaysia at the UN and at international forums to bring all relevant issues to the attention of the international community and world governments.