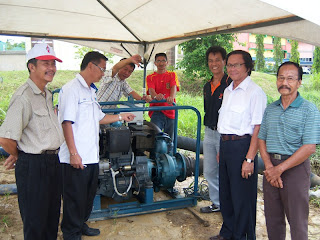 THE Kota Kinabalu Member of Parliament Hiew King Cheu arrived in Beaufort to attend to a meeting arranged by the Pakatan Rakyat committee in Beaufort to look at the various problem in the area. He was accompanied by the Sabah DAP Vice Chairman Edward Ewol Mujie and the Labuan DAP Chief Lau Seng Kiat.

MP Hiew gave the Beaufort PR team a briefing on the Sarawak State election on the big win of the PR. He said the win is not only the win of PR but it is truly the biggest win of the Sarawak people, especially the Bumiputera of Sarawak who had supported the PR in great strength and denied the BN.

The Beaufort PR group later brought the KK MP on a site visit to check on the three new flood prevention gates. The gates were built to stop the Padas River from overflowing into the Beaufort town. The recent floods proved that the gate failed and Beaufort continued to be submerged in deep water. The schools were closed, and the shops lost their businesses. The Beaufort people suffered again and again. 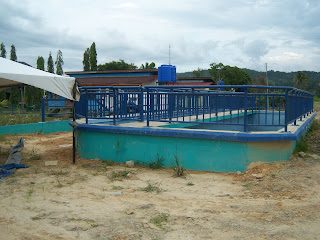 The flood gates are not serving the purpose and failed their job to stop the flooding of the town. Why the gate failed and what is wrong with the design? The little water pumps temporary brought in definitely can not do the job of pumping out the millions of gallons of flood water in Beaufort. During the visit, it is seen that the chamber of the structure has already silted up with thick mud and sand, and the flow of the water was obstructed from flowing flow out. They were told that during the flood, the workers couldn’t get the pumps started.

MP Hiew said that this cannot allowed to happen because the flood in Beaufort town had already caused the people there a lot of hardship and now even more angry due to the failure of the flood gates. What is the use of spending such a huge sum of tax payer’s money and there is still flooding. What about the kampongs further down stream, will they have to face the flood forever? 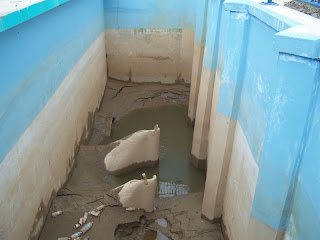 This is a solid proof that the people had wasted their past effort to support the BN government and the BN representatives all these while. They said they will definitely swing for a change like the brave Sarawak people. At least they will have someone else to save the Beaufort from deep water.