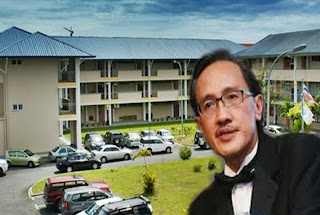 TOURISM, Culture and Environment Minister, Datuk Masidi Manjun welcomed the move by Mission schools in Sabah to ask the Government to allow Mathematics and Science subjects to be taught in the English language.

"I welcome the move by the Mission schools. It's worth serious consideration by the Ministry of Education. We are moving towards liberalisation of education in our efforts to attract more foreign students to study in Malaysia," he said at the closing ceremony of the national-level Gala Co-curriculum 2011 programme at Co-Curriculum Centre in Camp Malangang, Kiulu.

He said the move was consistent with the Government's policy to make Malaysia an education hub in South East Asia.

"I think this proposal is a right one. I do hope the Government will give it fair and serious consideration.

"In fact, I had advocated long ago that not only Mission schools, but it may be a time now for the Government to seriously consider turning some of the government secondary schools into English-medium schools.

"This is so that parents can have the opportunity and choice to send their children to an English-medium school.

"I believe creating English-medium schools among the government schools will make Malaysia a very attractive place for foreign students to come and study."

According to Masidi who is also the Minister-in-charge of education matters in the State, it is a way to provide an opportunity to make Bahasa Melayu a language to be known throughout the world with the arrival of many foreign students to the country.

"At the same time, we can ensure Malaysia continues to excel in English.

In the field of diplomacy and international business, we have to accept the fact that English in the world language."

Masidi said there must be concerted efforts to ensure Malaysia is not left behind in English proficiency.

"One of the ways to do this is to ensure students who come out of our schools are not only proficient in Bahasa Malaysia but also in English and other languages," he said.

Masidi believed the status of Bahasa Melayu as the national language would not be unduly affected by giving more emphasis to the teaching of certain subjects in English.

"The Government could insist that a credit in BM is a must for every student who sits for the SPM and STPM examinations.

"No doubt there is a logistics implication in the proposal as it includes an increase in education expenditure annually. But we should consider the merits and advantages of such suggestion.

Malaysia could actually have the choice of having the best of both worlds.

"Perhaps we should take cue from the educational transformation in China, Japan, Taiwan and Korea as they embrace the 21st century.

The teaching of English has become one of the biggest industries in China.

"Not only hundreds of thousands of Chinese are studying English overseas but the Chinese Government is encouraging world Ivy League universities to set up branch campuses in China," he said (D.E).