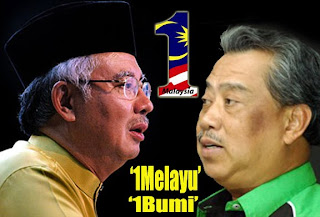 DEPUTY Prime Minister, Tan Sri Muhyiddin Yassin has sprung to the quick defence of Utusan Malaysia, the Umno official organ and the national daily which enjoys ‘unlawful’ immunity and impunity for blatant offences whether against the Printing Presses and Publications Act, the Sedition Act or other laws in the land.

In response to public condemnation of Utusan’s incessant stoking of communal hatred and tensions, the latest being its call for a ‘1Melayu, 1Bumi’ movement, Muhyiddin declared that Utusan Malaysia is the “voice and desire of the Malay community and also Malaysians in general”.

Muhyiddin is a picture of total absurdity in claiming that Utusan Malaysia is the “voice and desire” of Malaysians in general, when it does not even qualify to be the voice of the Malays.

No wonder that early this year the National Union of Journalists (NUJ) president Hata Wahari-himself a senior Utusan journalist until victimized and purged by the Umno official organ-blamed Utusan Malaysia editors for their ‘racial rhetoric’ and ‘fanning racial sentiments’ as causing the daily’s declining sale.

As a result, Utusan Malaysia’s nose-dived from one of the nation’s top circulation papers to a disreputable rag, falling from a height of a daily circulation of 350,000 to less than half the numbers - as Audit Bureau of Circulations (ABC) figures for the full year ended June 30, 2010 showed its circulation had dropped to 170,558 as compared to 181,346 the previous year.

The Utusan Malaysia editors are a disgrace to the profession of journalists and doing the Malay race and Malaysian nation a great disservice in continually, quoting Hata Wahari, “playing up racial issues and creating discord among the people of various races”.

If the police, the Attorney-Genereal’s Chambers and the judiciary are efficient, independent and professional institutions to uphold the rule of law without fear or favour, Utusan Malaysia editors would have no time to edit the Umno daily but would be trudging up and down the court houses over a mountain of criminal charges round-the-year!

But what should really cause consternation is that Utusan Malaysia is at best the voice of Muhyiddin particularly at odds with the Prime Minister, Datuk Seri Najib Razak.

How can Muhyiddin give endorsement to Utusan Malaysia’s call for ‘1Melayu, 1Bumi’ when it is clearly an open affront and repudiation of Najib’s 1Malaysia signature policy?

Is Najib’s 1Malaysia only meant for non-Malays while Muhyiddin’s 1Melayu reserved for Malays?

After his open repudiation of Najib’s signature policy with his declaration “I am Malay first, Malaysia second” declaration last March, Muhyiddin’s open endorsement of Utusan’s ‘1Melayu, 1Bumi’ call is Muhyiddin’s second unkind cut against Najib - another open defiance and challenge of Najib’s authority and legitimacy as Prime Minister.

Dare Najib slap down Muhyiddin and force him into line to loyally support the 1Malaysia concept?

Is the Barisan Nasional Cabinet prepared to resolve this conflict and contradiction between Najib and Muhyiddin at Wednesday’s cabinet meeting this week, or will all the Cabinet Ministers from Umno, MCA, MIC, Gerakan, SUPP and the other Sarawak and Sabah component parties dig their heads deeper into the sand to pretend that they are not aware of such open policy conflict between the Prime Minister and the Deputy Prime Minister – between 1Malaysia and 1Melayu?