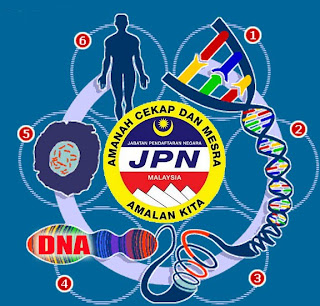 A FATHER applying for MyKad for his two daughters, aged 14 and 16, was shocked to receive a reply from the National Registration Department in Putrajaya asking them to get a DNA test first, at their own cost.

Natural Resource and Environment Deputy Minister, Tan Sri Joseph Kurup when asked for comment on this expressed surprise because normally they only need to get the declaration from the village head or District Chief supported by the elected representative.

Yap was asked to ready a bank draft of RM1,700 for the cost of the DNA test. He went to the Keningau District hospital but was told that the test could only be done in hospitals in Kuala Lumpur and Kuching.

For a kampung folk the amount is simply too much, as they are only earning an average of RM500 to RM800 per month.

Yap is at loss because he might not be able to get MyKad for his two daughters and he feared the consequences once they become adult.

He hoped the government would be able to look into the matter seriously.

Based on the NRD letter dated March 21, 2011, it was said that Yap and his daughter are required to undergo the DNA test since the children were born before his marriage was registered.

The DNA test result must be submitted within three months of the letter (D.E).