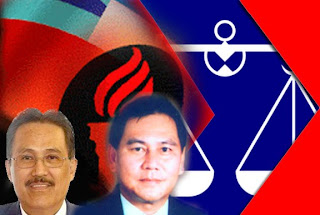 THE row between Liberal Democratic Party (LDP) and Sabah Umno has escalated to a point where an Umno leader has urged LDP to leave the Barisan Nasional (BN) coalition.

Nasrun said this in a hastily called press conference outside the State Legislative Assembly building yestyerday. According to sources, the local media have been ‘advised’ not to publish the statement in view of the general election.

“There were orders from the chief minister’s department to kill the story,” the source said.

Nasrun, who is an assistant minister in the state cabinet, had allegedly said that the open attacks in the media by LDP on Musa had reached a boiling point.

“Personally, I feel this not good for the BN, especially with the general election coming. Under the circumstances, it is not fair for a component party to lash out at another component party leader,” said Nasrun.

He added that Sabah BN members should look at how peninsula-based BN parties behaved. “They never aired differences between them in the media but used the proper BN channel to air their grievances.”

“LDP should respect the prerogative of the chief minister on issues such as cabinet appointments,” he added, dismissing LDP’s arguments that the state BN leadership under Musa had whittled away at LDP’s powers in the state.

“Whatever decision that has been made must be accepted or even if it is not accepted, you should complain through the proper channel rather than using the media. We don’t discuss problems in the open,” said the Lahad Datu assemblyman.

The state government leadership under Musa has taken LDP to task for a statement by its deputy president Chin Su Phin, warning that Sabah would face the same scenario as Sarawak BN which suffered unprecedented losses in the recent state polls.

Though Chin claimed he was speaking in his personal capacity and not for the party, LDP president VK Liew stepped in to support Chin for making a brave assessment of the Sarawak state election and the ramifications for Sabah.

Nasrun, however, said that based on the coalition principle, LDP should leave the BN if it wants to continue to air its views openly.

“It is unfair for them (LDP) to say they want to stay in BN but at the same time attack Musa,” he said, adding that “just like a husband and wife who can no longer stand each other. They should seek divorce”.

“Similarly, if LDP can no longer stand Musa as the Sabah BN Chief and Chief Minister, it should part ways,” he said, adding that with just two state and one parliamentary seats, LDP is not needed.

“We have bigger parties like PBS that is more experienced and stronger, hence they deserve more seats as well as the others,” he said.

He said that he saluted PBS because it had left the BN a few years ago as it was unhappy with its leadership.

“We hope LDP will do the same. If you are not happy with the chief minister, then leave BN,” he said.

Citing Usno, Nasrun said if LDP was not happy with the state BN Chief, it could follow in Usno’s footsteps in the 1970s when it was not a member of the Sabah BN but became a member of the federal BN.

He said as a component party, LDP’s attitude was unbecoming as it was going against the consensus spirit of the BN.

On whether Umno leaders in Sabah would be talking to the chief minister to call for disciplinary action against LDP, Nasrun said it could be the last resort.

“We try our best to ask LDP to tone down. What we are asking is for LDP to be sensible and be a gentleman. Be a gentleman like PBS… leave the BN,” he said.