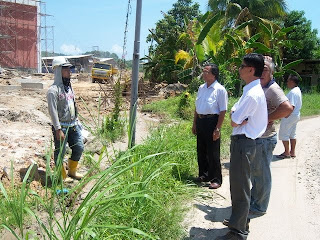 CAUSE…..Stephen and Edwards at the project site.

SABAH DAP Kapayan Branch received complaints from the residents in the Kg. Botong, Kapayan at Jalan Kapayan concerning the serious flood in the area whenever it rains. The access road is impassable due to the flood water, and residential houses here are flooded up to three feet of water.

The initial finding on the reason on the flood which was never a problem in Kg. Botong is due to the construction of the new ‘Kompleks Penyiaran’ project next to the Kampong here. The usual drainage outlet to the main storm drain near the highway was blocked and there is no suitable drainage system available. Therefore, whenever it rains the Kampong will be flooded quickly.

The new ‘Kompleks Penyiaran’ project is under the Ministry of Information (Kementerian Penerangan Malaysia) which is due for completion on 14th of June 2011. The construction work on site had caused the water draining from the Kg. Botong being blocked and no outlets available. The land reclaimed on the new project site is much higher than the kampong land, by least higher three feet.

Stephen said this is not right, and the project architect and consulting engineers should be more considerate to incorporate in their design of the new project site to cater for the water drainage of the surrounding resident area and kampongs. He further stressed on the need to provide adequate drainage system to avoid the flooding of the areas affected which is compulsory.

He requested the project architect and the engineers to look into the situation and make appropriate measures to construct drains and make connection to drain off the water from the kampongs. They cannot ignore the responsibility of taking care of the kampongs and the people there.