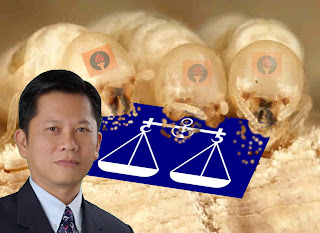 A PARTI Gerakan Sabah leader has urged the Liberal Democratic Party (LDP) leadership to stop behaving like the termites which are infamous for causing serious structural damage to buildings.

“This is precisely the attitude of the present LDP leaderships who seemed to have no qualms going all out to cause serious damage to the very house that houses them, in this case the Barisan Nasional,” said Au Kam Wah, who is also the Elopura Assemblyman.

He emphatically cautioned that if left unchecked, such an unhealthy phenomenon may eventually cause the collapse of the entire ‘BN structure’ in the State.

He thus concurred with the call made Gerakan Sabah Chairman Datuk Gordon Leong on Tuesday, calling for the BN top leadership to seriously consider issuing show cause letter and to take necessary disciplinary action against the leadership of the LDP, if they continue with their unhealthy and disrespectful public outcries undermining the integrity and stability of the BN coalition in the State.

Chong even proceeded to take the State government to court in 2009, but it was later struck out by the Court of Appeal.

He also believed that till today Chong still has some influence on the LDP.

He observed that all the previous and recent statements of the LDP leaderships attacking the State leadership were uncalled for, baseless, malicious and clearly designed to undermine the integrity of Sabah BN.

He noted such criticisms consistently and clearly indicated that they were of personal interest and aspiration in nature, rather than in the best interest of the State and its people.

“Their (LDPM leaderships) main contention and dissatisfaction was clearly due to not getting the position in the government which they desperately wanted. It was clearly a sour grape syndrome.

“Records show that they hardly bring up any significant issues that genuinely concerned the people. It’s all about position, position and position. And as for its so-called most vocal leader Chin Su Phin, everyone in town knew that he’s a contractor by profession, who benefitted immensely using his position in the party,” he pointed out.

He went on to note that BN’s major victory in the Batu Sapi by-election last year was a strong evident that the current setup of Sabah BN under Musa’s leadership, is strong and functioning well.

“Compared to the time when the LDP President was holding the CM post, Datuk Musa has given much more funding to the Chinese community, especially in aid of the Chinese education. In fact, the huge difference in the amount would put Tan Sri Chong Kah Kiat to shame. This is public knowledge.

“Moreover, when Datuk Musa was urged by the public to reconsider the setting up of a coal–fired power plant, he brought the issue to the State Cabinet and had it cancelled. However, when the public requested Tan Sri Chong Kah Kiat to reduce gambling, he instead doubled the number of slot machines in Sabah and re-activated a 4D operation that had been cancelled. Perhaps the LDP leaders are also having selective memory losses, so bad that they need to be constantly reminded of their misdeeds in the past!” charged Au.

He thus urged the LDP leaderships not to attempt to cover up their own incompetence which led to the decline of the party, by blaming the others.

He said such an attitude is not only irresponsible but worse is giving the opposition an opportunity to undermine the BN.

He reminded that ever since the formation of LDP, the party had been losing some of their senior leaders, all of which were due to internal squabbles that were often linked to manipulations by individuals with selfish motives.

“BN itself has never been a problem to LDP. Therefore the call for a change of leadership in State BN is simply outrageous and uncalled for. What LDP must do now is to have an overhaul and change some of its own leadership, have a face lift and move on,” he concluded.