LAPTOPS ONLY FOR ‘THE RICH' STUDENT? 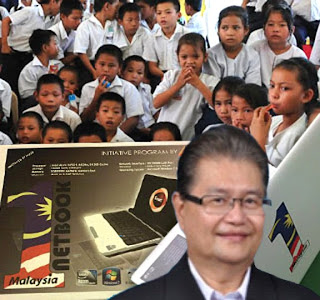 WHILE Sabah DAP appreciates the initiatives and efforts of the Government in the free distribution of free laptop computers to the needy poor families in order to provide them with access to knowledge and opportunities to explore, experiment and express themselves in ‘constructionist learning’ process.

But anyhow, there seem to be problems in the manner in which the laptops were distributed to those ‘privileged’ families who have ‘good connection’ with the Government agents entrusted in the delivery of the goods.

A brief survey was carried out by Sabah DAP interior mobile service team at several kampungs in Keningau, Bingkor and other rural areas that they found that many unhappy parents of poor families were being deprived of getting a ‘free laptop’ for their needy children.

Sabah DAP received numerous complaints from parents of needy families in the interior that there were families who had close connection with certain officials or, community leaders were granted the free laptops while many unfortunate poor families were being deprived of receiving laptops in the interior of Sabah.

Dr Benjamin Yapp, Sabah DAP parliamentary liaison chief for Keningau and Tenom advised the Government to devise a proper system of distribution of ‘free laptop computers’ to needy poor families in the rural areas through a proper channel, the Ministry of Education and the selected rural schools in order to ensure that the ‘free laptops’ were properly distributed to only those needy poor families whose children have achieved certain good grades in schools.

By so doing, we could encourage and inspire school pupils to study hard and achieve good results in order to deserve such a reward of getting a free laptop computer.

Dr Benjamin stressed that there was no point to give away 'free laptops' to those undeserving families who might not be able to directly benefit from the laptops due inadequate communication system, and no reception in most rural areas. It would be better to spend the millions of ringgit for improving the basic rural infrastructures and amenities in order to alleviate poverty and hardships among the rural communities.

Dr Benjamin commended on Pantai Manis Assemblyman, Datuk Abdul Rahim Ismail for urging his fellow elected representatives to ‘stop telling the people that huge allocations have been set aside for development projects in Sabah’.

Sabah DAP fights for the interest of the common people and they would continue to give constructive criticisms and demands improvement towards the socio-economic development for the people of Sabah.

Sabah DAP urged the Government to be more sensitive to the feelings of our local people, accept their criticisms and ensure that whatever the Government had promised to carry out, they must be fulfilled to their satisfaction.