BN SOILING ITSELF IN KOTA MARUDU 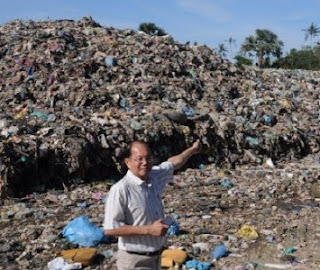 A GROWING pile of garbage – several million cubic feet of festering waste – may be another legacy of the Barisan Nasional Sabah government in Kota Marudu if something is not done fast.

The stinking pile of garbage that is about 15 feet high and occupies about three acres is growing with up to eight trucks of rubbish dumped at the site by the district council on the site every day, according to residents.

A vile smell permeates the air for kilometers around Kampung Tambun where the rubbish putrefies and makes people feel sick.

Surprisingly, the site chosen to dump Kota Marudu’s garbage is a stone’s throw from three primary schools, two kindergartens, three nurseries, a health clinic, a mosque and government offices and many staff quarters.

PKR is on the case and is contemplating helping residents in the area file a suit against the government for endangering their health.

“I was told by residents who accompanied me on site that at least eight trucks carrying at least 15 tonnes are dumped by the council at the site every day,” said Kong Hong Ming, PKR presidential council member and an activist lawyer.

“There are all kinds of wastes and rubbish accumulated there for years now. The only earth drain between the dump site and the surrounding residential areas is in deplorable condition choked up with plastic bags and full of stagnant polluted water.

“The terrible stench from the entire site is unbearable even at a distance from the dump site … just imagine … those people have to live with such appalling conditions everyday for all these years.

“This site is potentially an invitation for disaster and outbreak of diseases. The effluent from the polluted dumping site becomes runoff to the river and sea where fishermen catch and sell fishery products to the public,” Kong said.

He said Sabah PKR demanded that the Kota Marudu District Council and relevant authorities and political representatives for the place take immediate steps to resolve the problem and relieve the health risk.

The people there, he said, would be advised on taking legal action against the parties concerned “to put an end to their suffering by seeking appropriate relief from the court of justice.”

Kong said he had been receiving the same complaints from friends and the public many times whenever he travelled to Kota Marudu, but did not realise the extent of the problem until he visited the site.

The former Sabah minister was shocked to see the dumpsite recently while on his way to attend a land dispute in Pitas.

The dumpsite is located at the old Kota Marudu town known as Bandau and was previously used by Sabah Electricity Board (SEB) as a power station serving the old township.

Kong puts the blame for the deplorable situation squarely on the council, calling them the biggest culprit in indiscriminate rubbish dumping in the district and endangering public health as well as destroying the living quality and environment of the local community.

“It is a disturbing case of gross negligence as well as breach of duty by Kota Marudu District Council. There are at least 50 houses around the dumping grounds. I feel very sorry for the students and the residents in the neighbourhood who have to bear with the unpleasant sight, smell and smoke from the dumpsite every day,” he said.

Kong, who is also PKR Tawau chief, said it should be noted that the council had been using the site, which is either a state land or belongs to SEB, unlawfully.

The council does not seem to have a disposal system in place as trucks simply unload the waste there where it accumulates.

Residents and community leaders claim they have repeatedly complained to the council, the district office and local politicians to no avail.

Kong assured them that he will not let the situation remain.

“The Kota Marudu District Council and all the councilors as well as the political representatives and Department of Environment and Health must have an immediate joint inspection of the dumpsite.

“They must see and feel for themselves how the people there have suffered over the years due to their incompetence, mismanagement and indifference,” he said.

The issue will come as deeply embarrassing to Kota Marudu MP, Maximus Ongkili who is the federal science, technology and innovation minister and a member of BN coalition member, Parti Bersatu Sabah (PBS).