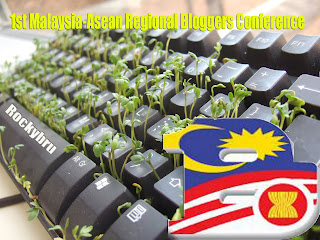 Just before lunch, a Singaporean ex-journalist who now lectures for a living, and who was invited as a speaker at the 1st Malaysia-Asean Regional Bloggers Conference which ended today, asked what the PM would do to reduce ‘polarization’ in the Malaysian blogosphere.

I was seated at the main table in my capacity as the Adviser to the Blog House Malaysia, the NGO that organized the Conference. Tun Dr Mahathir Mohamad, our patron, and Blog House Malaysia president Syed Akbar Ali were up on stage with the Prime Minister, who had just delivered the keynote address.

Rosmah, Siti Hasmah and three Asean bloggers were at the main table with me. It was standing room inside the ballroom of the Intercontinental Hotel as all 300 seats for lunch were taken up by sponsors, bloggers and observers.

Najib said he, too, would like to see more inclusiveness and less polarization in the Malaysian blogosphere.

"Perhaps this is something the Blog House of Malaysia would want to take up ...", he said, throwing a challenge to the Blog House Malaysia to rope in bloggers "from the other side" of the political divide.

The PM is, of course, being consistent with his ‘inclusive’ approach in almost everything he undertakes. But I'd like to set the record straight here. The Blog House is NOT a grouping of bloggers from ‘this side’.

Some people accuse of being an UMNO tool. He he. I don't think UMNO would like that since there are names like Tony Yew and Eric Woon on our Exco! And certainly we are not barring anyone - not the ‘usual suspects’ nor the ‘other side’ bloggers - from coming in.

For the 1st MARBC, our invitation for people to participate was an open one. In addition, the meeting with the Asean bloggers was not politically-motivated, in the sense that we were NOT interested if the bloggers from Asean were usual suspects in their own countries or have preferred sides.

The five-point KL Consensus (or Declaration) that we adopted during our meeting will attest to this:

1. The establishment of an Asean social media and blogging network to promote understanding, good relations, unity and cooperation for regional betterment and progress of the new media practitioners in the spirit of mutual respect;

2. To assist in achieving and promoting the common values and aspirations of goodwill and to promote greater understanding and familiarity of the social media;

3. To promote the freedom of expression, freedom of information and freedom from persecution;

4. To promote ethical practice of the social media; and

5. To meet regularly and promote the growth and progress of social media in Asean

In short, we were not concerned at all about what their ideologies and we were not trying to make anyone interested in ours. There is more to blogging than politics and I believe that today we have pushed blogging to the next level.

In the weeks and months to come, the Blog House Malaysia will pursue programs discussed during yesterday's session with the Asean bloggers. These include a joint project to launch an Asean Bloggers' Day and a collaboration on Asean tourism.

We could do with help from everyone, not just those from ‘that side’.

The 1st MARBC would not have been possible without kind (and brave) friends in several corporations, namely:

It's good to note that the Blog House Malaysia has already gotten offers to help organize our next event in Malaysia!

I won't say what it is yet but it will probably happen in July this year.

Ramblings and doodlings of an unsettled mind!