MEDIA SHOULD CRITICISE THE GOVERNMENT 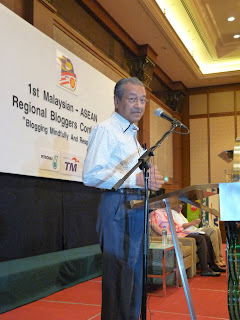 MAINSTREAM media in the country should allow themselves to be critical of the government now and then, said former prime minister Tun Dr Mahathir Mohamad.

He said that many were unwilling to criticise the government as they felt that they should support it all the way.

Dr Mahathir said the mainstream media also practised self-censorship, and this had given the wrong impression that they were being censored by the government.

"So, the government sometimes gets lopsided views about what the public is thinking. They (media) think that they should self-censor.

"And, of course, this gives the impression that it's the government who's restricting them," he said at the inaugural Malaysia-Asean Bloggers Forum opened by Prime Minister Datuk Seri Najib Tun Razak here.

Dr Mahathir, who is also patron of Blog House Malaysia which organises the event, said constructive criticism should be given when it was for the betterment of the country.

He said while bloggers should give fair treatment to the government and the people through their blogsites, they themselves should be treated fairly and justly.

About 35 bloggers from the region are taking part in the forum which carries the theme ‘Blogging Mindfully and Responsibly’.(BERNAMA)