SHOW CAUSE LETTER TO LDP? 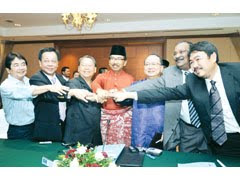 GERAKAN Sabah has urged Barisan Nasional (BN) top leadership to seriously consider issuing show cause letter and to take necessary disciplinary action against the leadership of the LDP, if they continue with their unhealthy and disrespectful public outcries undermining the integrity and stability of the BN coalition in the State.

He emphatically described LDP leadership’s constant outcries/outbursts over their so-called dissatisfaction with the State Barisan Nasional (BN) leadership as uncalled for childish behavior that reflects their political immaturity, despite the fact that they have never failed to boast about having been in the Sabah political scene since 1989.

He added that such an attitude is also confusing and misleading the public besides contradicting their purported pledge of support of the Prime Minister, Datuk Seri Najib Tun Razak and claiming that they respect his wisdom.

“Their constant uncalled for public outcries contradict themselves by not respecting our PM’s decision and strong support of the State BN leadership of Sabah, in particular Datuk Musa Bin Haji Aman,” said Gordon.

He also rubbished LDP leadership’s claimed that they have been sidelined by the State BN leadership despite being a long standing component party of BN.

“By tracing the series of public outcries and outbursts of the LDP leadership, we would realize that LDP’s allegation is baseless and unsubstantiated,” he said.

To substantiate such contention, he cited a chronology of events that led to the party’s own decline.

He reminded that after the sudden resignation of LDP’s former president Tan Sri Chong Kah Kiat as the Minister of Tourism and Environment, one of its leaders Datuk Liew Yun Fah (as he then was) was made the Minister of Youth and Sports only to be dropped by the LDP leadership at the following general election and due to internal conflict was later revoked of his membership.

Unfortunately, in last September Peter quit LDP as he could not agree with the party’s then passé constant public outbursts that it could not work with the Chief Minister.

“Hence – no prize for answering the question “Who sidelined who?” quipped Gordon.

He thus opined that LDP is constantly not appreciative of what the State BN leadership does for them by including their leaders in the mainstream of Sabah politics.

“LDP should know full well that they cannot have their cake and eat it! One cannot help wonder if LDP is with the opposition or with BN! We are especially puzzled when the DAP Sabah chairman Jimmy Wong voiced its support for LDP’s stand,” he added.

“Then they should be brave enough to take the next course of action, which is to quit the coalition to prove that they can get and enjoy the support of the people, as what its former coalition member Sabah Progressive Party (SAPP) did in 2008 when they could not see eye to eye with the BN top leadership after 2008 General Election,” he said.

Noting that in the spirit of the BN camaraderie, all the opinions and views of the component parties are taken into the account by the State BN leadership, Gordon said LDP should not cry foul and be a sour grape simply because their opinion differ from that the majority of the other BN component parties.

“After all we live in a democratic country. Let us be reminded that there is no room for personal grudges within the BN,” quipped Gordon.

He thus reiterated that LDP leadership must immediately stop their antics of public outbursts and public washing of dirty linen.

“The BN component parties should instead close ranks and concentrate on how to serve the rakyat diligently under the umbrella of BN so as to guarantee a landslide victory for BN in the coming general election,” he added.

Gordon assured that Sabah Gerakan would continue to give its fullest unequivocal support to the capable and able leadership of Datuk Seri Musa Bin Haji Aman.