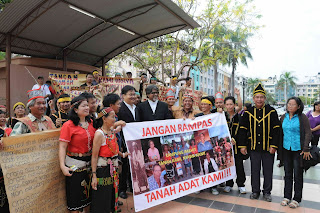 THE elimination of native customary rights (NCR) on land occupied by two groups of indigenous people in Sarawak amounted to a gross violation of their fundamental rights, the Federal Court here heard today.

Lawyer Sulaiman Abdullah, representing the native groups, argued that the directive issued by the Sarawak Resource Planning Minister to deny the customary rights of natives on their land ought to be set aside because it deprived the natives of their life, livelihood and way of life.

He said the survival of indigenous people, such as the appellants in this case, was intrinsically linked to their land because their source of food, medicine and life support system, including their economic, cultural and social way of life, would be taken away when they lose their land.

Sulaiman said Sections 5(3) and (4) of the Sarawak Land Code under which the directive was issued were unconstitutional because the directive amounted to taking away of life, thus violating Article 5 (1) of the Federal Constitution.

Arguing before a three-man panel led by Chief Justice Zaki Azmi, Sulaiman said the state laws had failed the test of being just, fair and equitable as defined under the Federal Constitution because those laws violated the basic rights of the native people.

Sulaiman also said NCR were not merely proprietary rights that could be equated with the right of an owner of alienated land. Instead, NCR amounted to a right to life and comes under the protection of the Federal Constitution.

“Would mere monetary compensation be adequate to compensate for the interests of native communities in their lands in view of the fact that the NCR amounted to a right to life, and extinguishment would deprive them (natives) of their right to life and livelihood?” he said.

He said the special relationship of the indigenous community and their land was also recognised by international human rights law and Malaysian law.

He added that it was the responsibility of the Sarawak government to protect the rights of the natives.

“For natives in Sarawak, this is also a reflection of the Brooke government’s belief that Sarawak ‘is the heritage’ of its people and that land is their ‘lifeblood’,” he said.

He also said procedural fairness was not accorded to the appellants, as the natives were not consulted prior to the elimination of their NCR.

The two groups are, respectively, from the Dayak communities of the Kayan, Kenyah and Ukit ethic groups and Iban communities.

This group refused to move to the Asap resettlement scheme, and continues to stay upriver in Batang Balui.

The second group, Jalang ak Paran and Kampong anak Amih, are residents of Rumah Munggu, a longhouse in Tatau, Bintulu, Sarawak. Their land in Ulu Batang Tatau was acquired to build a pulpwood mill.

This group, comprising their families, continues to live on its land. Until today, no pulpwood mill has been constructed on the proposed site and the land has reverted to jungle.

Native groups were appealing against the decision of the Kuching High Court that summarily rejected their suit on the question of law.

The High Court and the Court of Appeal ruled that the minister’s direction was valid. The natives, however, want their case to be remitted to the High Court for full trial.

Sarawak state legal counsel JC Fong argued that NCR, for some 80 years, under the laws of the state of Sarawak, could be eliminated upon payment of compensation to the natives whose NCR have been extinguished.

Fong said the rule of natural justice, which requires a person to have the right to be heard, was excluded from the law.

The panel, which also included Chief Judge of Sabah and Sarawak Richard Malanjum and Federal Court judge Md Raus Shariff, fixed May 16 for Sulaiman to submit his reply.

On that day, Sulaiman will also address the court on the mechanism of assessing compensation to be given to natives whose NCR were eliminated.