ANWAR’S ONLY GOAL IS TO BECOME PM 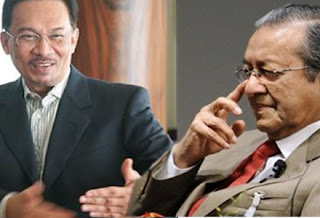 According to the former premier, this included making different promises to appease different political parties within Pakatan Rakyat.

“He is a man who is trying to please everybody’s wishes,” Dr Mahathir told reporters here.

Dr Mahathir claimed that Anwar’s primary aim was to become prime minister, and that as a leader, he had no concrete plans for the country or Malaysians.

“His main struggle is to become PM, to go to Putrajaya. For Indians, he will support Hindraf. For DAP, he says he says ‘scrap affirmative action’,” said Anwar’s former mentor.

The longest-serving prime minister gave a speech here earlier on Malaysia’s approach to public leadership, in which he stressed the importance of voters being extra careful in choosing their leaders.

“If a wrong leader is chosen, there is a high price for it.

“In a democracy, one has a right to choose a leader. One also has the right to dispose of a leader, it is the best system by the human race,” he said, pointing out that a “good leader” needed to be well-versed in a multitude of fields and studies.

He also said a good leader needed to listen and be able to absorb criticism, and that the public must not be afraid to voice out their concerns.

“As PM, I did wield authority, but you must never forget your origins. We are all humble people, from lower beginnings,” Dr Mahathir said.