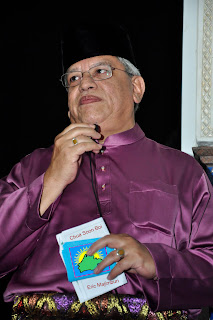 BARISAN Nasional (BN) Secretary General, Datuk Seri Tengku Adnan Mansor should first call for the Perak State Assembly dissolution, as well as for the resignation of all the Umno-linked ex Parti Keadilan Rakyat MPs, before asking the two MPs from Sabah Progressive Party (SAPP) to step down.

Similarly, the former Liberal Democratic Party (LDP) leader Datuk Peter Pang (Karamunting) too should have been asked to resign long time ago, and to re contest under his present party’s ticket, which is the Gerakan.

Chong contended this in response to the statement by Tengku Adnan in Tawau calling for Sepanggar MP Datuk Eric Majimbun and Tawau MP Datuk Chua Soon Bui to resign, citing that the seats were won under the BN ticket in the last General Election.

Tengku Adnan was also reported as saying that after resigning Majimbun and Chua should contest under SAPP symbol to test the support of the people.

Chong said SAPP was appalled with the way senior BN leaders such as Tengku Adnan making such a foolish statement knowing very well the existing law which was formulated by the BN Government disallows an elected representative to resign and re-contest the seat.

“Didn’t he realize that an assemblyman or MP will lose his or her right to contest in an election for five years, if they do that, or is he trying to fool the people of Sabah?” he asked.

He said Tengku Adnan’s statement showed not only the arrogance of the BN leaders but also their lack of ideas and the penchant to constantly fooling the people.

He quipped that if the existing law allows it, SAPP elected representatives would have done it long time ago, without having to wait for Tengku Adnan to make such a hollow-sounding call.

He suggested Tengku Adnan to talk less and instead go down to the ground to see for himself the misery state which the majority of Sabah people is currently living in.

He especially suggested Tengku Adnan to travel by road from Kota Kinabalu to Tawau, to observe for himself the horrible condition of the RM565 million Sapulut-Kalabakan Highway, if he decides to come to Sabah again.

Chong added that the senior Umno leader should also explain on the reason for the BN government failing to ensure consistent water supply in Sabah, particularly in Tawau, which recently was without water for three days just before the Chinese New Year.

“Tengku Adnan should also talk about the healthcare issues in Sabah, which had not been given due attention by the BN government resulting in sad situations like the recent incident where a boy lost his life in Tawau Hospital.