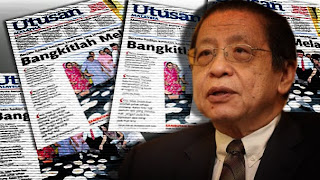 UTUSAN Malaysia has accused DAP of being the world’s most racist party following Lim Kit Siang’s recent call for Chinese voters to unite and ensure a change of government.

The DAP parliamentary leader had in a Chinese New Year message said that the Chinese community had managed to attain economic prosperity despite the failings of the Barisan Nasional (BN) federal government, which has been mired in 'corruption' and 'abuses of power.'

Lim’s remarks were in response to a statement made by MCA president Datuk Seri Dr Chua Soi Lek, who had called on Chinese voters not to 'experiment' in the next general election, as Barisan Nasional’s leadership has continually allowed the nation to prosper.

Lim said Malaysians needed to vote the opposition into power as Umno and Barisan Nasional (BN) suffered from an 'incorrigible disease of denial complex' in refusing to admit the failures of government and nation-building.

In response, Utusan accused Lim of bringing up the issue of concentration of wealth among the Chinese, and that it was being used as a “political model” to win over votes.

“Kit Siang’s actions in bringing up the issue of wealth among races is dangerous. Everyone knows that the economy is controlled by the Chinese because of what the colonists had done in placing the race in cities, the business culture had been inherited a long time ago.”

The editorial went on to accuse Lim of pushing for 'only the rights of the Chinese' and not for other races, and also took pot shots at the opposition party’s latest attempt to recruit more Malay members.

“What he (Lim) will not be able to do is repair DAP’s racist image which is becoming worse. The addition of Malays in the party will not change anything.”