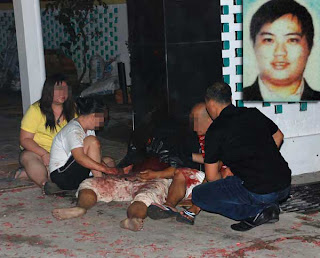 POLICE will launch a crackdown on illegal fireworks after a firework exploded in the face of a 26-year-old man on the first day of Chinese New Year, killing him instantly.

State police commissioner Datuk Hamza Taib yesterday said authorities would look into how and where the victim had obtained the firework as they were monitoring the situation statewide.

He said the public are not allowed to play any type of fireworks except two types of firecrackers, namely ‘Pop-Pop’ and ‘Happy Boom’ which are considered not dangerous.

“In cases like city carnivals where firework displays are involved, an application has to be sent to the city police chief which would then be forwarded to me for approval.

“I will decide whether it is feasible to allow the firework shows,” he said, adding companies with licences to import firecrackers needed to verify with the police the items they were selling.

In the horrifying incident on the first day of the Lunar New Year, By Shaow Yong was instantly killed after a malfunctioned firework that did not go off, suddenly exploded in his face when he went to check on it.

It is said that Yong, the only son of four siblings, had lit up two sets of fireworks, to usher in the auspicious lunar New Year in front of his family’s residence at Taman Seputih in Luyang here.

Family members, including his pregnant wife, in her 20s, whom Yong had just married last December, watched gleefully after the first one blasted into the sky and exploded into an array of a wonderful firework display.

However, the second firework remained on the ground after the fuse burnt out, prompting Yong to inspect the explosive.

Just as he went nearer to have a look at the firework, it exploded, causing severe injuries to his face and head. He was killed instantly.

Family members rushed to Yong’s lifeless body and sat him in front of their house in disbelief that they had lost a son, a brother and a husband.

Neighbours immediately informed the police and a team led by City deputy police chief Superintendent Chandrasehkaran Muthu, were at the scene to carry out investigation.

Yong’s body was later taken to the Queen Elizabeth Hospital in a police truck.

Meanwhile, City police chief Assistant Commissioner Ahmad Sofi Zakaria said the accident was tragic and warned the public not to play with firecrackers or fireworks.

“These items are prohibited and they can be very dangerous and lethal as was the case here.

“The police will always monitor the situation and we will take action on those caught flouting the rules,” said Sofi, dismissing any foul play in the incident. (BORNEO POST)