BABY BORN WITH NO BLOOD 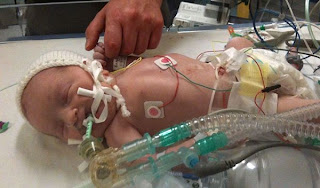 A rare condition drained his tiny frame of virtually every drop while in the womb. When he was delivered he looked pale and stillborn and doctors were unable to find a heartbeat for an astonishing 25 MINUTES.

But battling Oliver survived against all odds after being given oxygen, gentle heart massage and a lifesaving blood transfusion.

Medics fought back tears when his heart monitor let out the first tell-tale beep. Oliver is now a happy, healthy 15-month-old toddler to mum Katy and dad Jeff.

Publishing executive Katy, 36, from Maidstone, Kent, said yesterday: "Oliver's birth was so traumatic that I haven't been able to bring myself to tell his story till now.

"He was born dead with no blood in his body, but now he's sitting here smiling at me. The doctors literally brought him back to life and I will never be able to thank them enough for this wonderful gift." 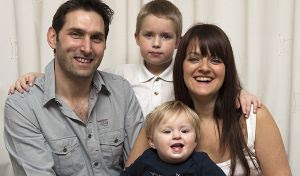 Oliver almost bled to death after a rare condition called Vasa Previa formed an extra vein in his mum's womb. It burst and Katy woke up covered in blood 37½ weeks into her pregnancy.

She was rushed to Maidstone General Hospital and was shocked to discover it had all come from her baby.

Oliver was born by emergency Caesarian weighing 6lb 1oz at 5.12am. After attempts to resuscitate him he was given a blood transfusion pumped into the still-attached umbilical cord. And at 5.37am the first heartbeat was detected and grew stronger as he was given more blood.

Katy, who was anaesthetised and unaware of the drama said: "Doctors said it was one of the most amazing recoveries they'd ever seen. Oliver had no blood, no heartbeat and looked stillborn, but somehow they got him back.

"But there were huge fears he had suffered brain damage after being starved of oxygen for so long."

Oliver was taken to a special care baby unit where doctors decided to lower his body temperature to save his brain from damage.

He was placed inside a tiny coat which chilled him to 33°C to make blood flow away from his skin and to his brain and heart so they would heal more efficiently.

After three nail-biting days, consultants began raising his temperature to the normal 37°C by half a degree a day. At the same time, milk expressed by his mum was pumped directly into his stomach.

And after just 11 days Oliver was well enough to be taken home to start family life with his mum, salesman dad Jeff, 42, and seven-year-old brother Jack.

Oliver's traumatic fight for life was not the only shock for mum Katy, she had been told she was expecting a GIRL after a series of ultrasound scans during her otherwise-normal pregnancy.

She said: "I had a baby shower and was given £300 worth of pink clothes and toys by friends and family. Thankfully I kept all the receipts!"

The proud mum added: "Ollie's just started walking and his favourite game is now hide and seek. It is wearing me out chasing him around the house!

"It's hard to believe, looking back at what he's been through but Ollie's now a bright, happy boy with his whole life ahead of him.

"He's a walking tribute to the doctors who worked miracles and he's a right little battler." (THESUN.CO.UK)