EXCITEMENT OF LEAVING UMNO GOES ON 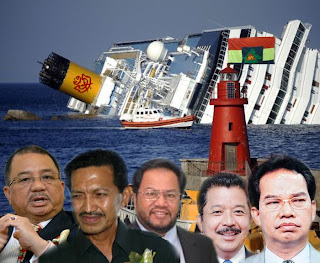 Sabah leaders are now demanding their rights because Federal Government under BN in particular UMNO has been treating Sabahans unfairly.

Nothing short of excitement in Sabah politics rumors such as this brewing hot all over. Because its rumors no one can be blamed if it will be forever rumors.

Assumed it happens, how creditable is this maneuver? Will UMNO sink in Sabah? The very first question is, will these named personalities dare enough to jump ship? Some had jumped quite a number of times already like Lajim and Amir Kahar.

Many close to Lajim said he (Lajim) wouldn’t dare to do it not without price, as heap of files is readily on display waiting for the exciting moment-files means the sort of response from the leaders in power would do, expose the past deeds. Meaning to say, if a leader like Lajim does it, all but the creation of UMNO itself, the end game, all is over, all back to square one. And that must the grand strategy by UMNO.

Look at the other way, if this happens it wouldn’t scared UMNO so much, as these are old faces, some are cetogarised as political dead wood already, with them or without them wouldn’t change much, many young leaders are on the offing so why worry?

If that is how politics goes in Sabah I shall stick to SAPP I think our leaders are much more credible and morally decent, even if they are frogs in my party but I make sure their legs are imputed or else we reject leaders who are going for self interest, this is my assurance as party leader.

Sabah voters must be able to make their own fair judgment out of these political doldrums.

SAPP is not communal political party but for all. There has been tendency other political parties are pushing SAPP to the wall by saying its a Chinese based party. I’m one of the leaders prepared to have as lengthy discussion as possible to rebut the idea.