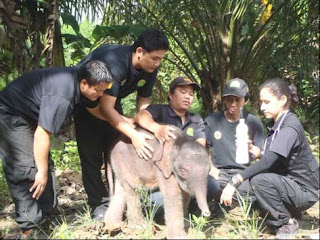 SUCCESSFUL...... Dr Diana and her team of WRU rangers performing a medical examination and feeding the baby elephant.

SABAH Wildlife Rescue Unit (WRU) has rescued a male baby elephant estimated to be merely a few weeks old in a plantation 40 km from the town.

The abandoned baby elephant found in a deep moat was unable to come out of it at the plantation, Sabah Wildlife Department (SWD) director Dr Laurentius Ambu in a statement.

“The SWD team was informed of the trapped baby elephant by plantation workers who asked for assistance,” he said.

He added rescue members caring for the baby elephant reported that the calf was suffering from severe dehydration. It also suffered a lot of cuts and abrasion on its body.

“Our WRU veterinarian, Dr Diana Ramirez and rangers have given it massive amounts of fluids and treated the wounds.

Even though its condition seems to have improved, it still needs critical and constant care to improve and survive.

“Presently, we have a veterinarian and four staff caring for the baby elephant in the 24-hour intensive care.

We are hoping it can survive for the next 72 hours as this will increase its chances of survival.” Dr Ambu said the rescue of the baby elephant was very special as it occurred near the Chinese New Year.

“The rescue came just weeks after the rescue and helicopter airlift of a very rare Sumatran rhino on Christmas day.” The female rhino, Puntung, now resides at an interim facility at the Tabin Wildlife Rescue.

Dr Ambu also commented that in the recent Sabah Wildlife Conservation Colloquium, the conservation status of the Bornean Pygmy elephant was promoted to totally protected.

With the status upgrade, anyone caught killing and hunting the animal faces a mandatory jail sentence of six months and a fine of RM50,000.

Aside from that, SWD will be establishing Sabah first Bornean Elephant Sanctuary (BES) in Kinabatangan with her conservation partners — Malaysian Oil Palm Council and Borneo Conservation Trust Japan (BCT).

“The elephant situation in Sabah is quite critical as there are only 2,000 individuals left in the wild.Their habitat is also severely fragmented by agricultural and human activities.

"There is also an increase in human-elephant conflicts resulting in more elephants being killed and orphaned elephants rescued. BES was established primarily to help the species and the rescued baby elephants.”

He also explained that it was very uncommon for elephants to abandon their calf due to their strong maternal instincts.

“The baby elephants are not only cared by the mother but also their older siblings and other adult females in the herd.”