RUMBLE IN THE SKY OVER SAMARAHAN 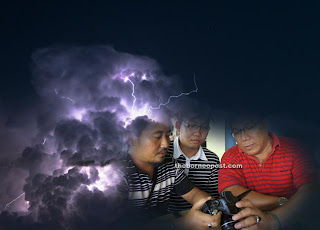 HERE IT IS..... (From left) Harith, Ferdauz and Mahmud listen to a recording made by Harith when the incidents happened.

UNEXPLAINED chilling sounds, which filled the air of Samarahan in the wee hours of Jan 11 and 12, have residents there puzzled and perturbed until today.

One of the theories being thrown into the pan is that it could be a by-product of the High Frequency Active Auroral Research Programme (HAARP) undertaken by the United States, while others believed it were from processing machines hard at work at an oil palm factory owned by Felcra in Kampung Endap.

But the fact remains that until today the mysterious sounds, which some say resembled loud snoring sounds, remain veiled. Teacher Mohd Ferdauz Jemain, who lives at Kampung Meranek, was one of those who heard the unexplained phenomenon on Jan 11.

“It was around 2 am when I was awoken by a strange sound. It was a loud hushing sound, and quite similar to someone snoring.

“I immediately got out of bed and went outside of my house to see what was happening. The feeling was a chilling one. I could not establish where the sound was coming from..... it was as if something coming from the sky.

“Frightened, I quickly dashed inside, but stayed awake till daylight as I would not sleep any longer. If I am not mistaken, the sound persisted until about 5am.”

To prove that he was not spinning a tale, Ferdauz said he had recorded the phenomenon on his mobile phone, and he played it for thesundaypost reporter yesterday.

He added that the matter became a hot topic of discussion in Samarahan that day, and some of the residents even documented their experience on Facebook.

“Villagers in Meranek, Pinang, Sindang, Tambirat and even those living at Desa Ilmu housing estate have also heard those eerie sounds.”

Several residents suggested that it could have come from the oil palm factory in Kampung Endap, but resident Harith Amin, who had worked at that factory previously, brushed it off as nonsense.

“The factory has been there for the last eight years, and I am sure it was not sounds produced by the machines there. In addition to that, no oil palm processing machines could produce sounds which could be heard 8km away,” said Harith, who also made a recording of what he had witnessed. To verify Harith’s theory, Ferdauz decided that should the phenomenon occur again the next day, he would make a dash for the factory.

Ferdauz: “I worked at a school in Sebuyau, so I wake up very early to go to school. True enough, the strange sounds happened the next day, and I quickly made a stop in front of the factory. No sounds came out from there (factory).”

Ferdauz claimed that he also saw strange pattern in the skies in the early morning of Jan 12.

“The clouds appeared to be in straight lines, and well formed. I have never seen anything like it, but whatever it is, I am sure there must be a scientific explanation for it.

“But later that day, an earthquake hit Sumatera in neighbouring Indonesia with a magnitude of 7.3 on the Richter scale. I am not sure whether both incidents are related in some ways.”

The incidents only occurred for two nights – Jan 11 and 12.

Meanwhile, Kampung Meranek’s JKKK chairperson Mahmud Pawi, who claimed that he also heard the sounds together with his family, said hoped that the authorities concerned could shed light on the matter.

“When I woke up that morning (Jan 11), I had goose bumps just listening to the sounds. I quickly woke up my entire family and we sat at the veranda trying to figure out what it was and where it was coming from.

“We hope that someone can step forward and enlighten us with an explanation.”