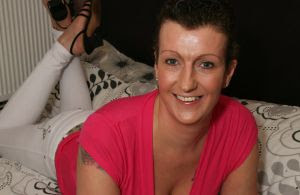 AFTER spotting a gorgeous young man on her way to the shops, Crystal Warren couldn’t wait to speak to him on her way home. She’d spent her whole grocery trip daydreaming about where they could sneak off for some illicit sex.

Two hours later, after flirting outrageously with the total stranger and talking her way into his bed, she was back at home, delighted at how her afternoon had panned out.

But this sexual encounter wasn’t a one-off moment of passion she planned to gossip about later with friends. In fact, it was pretty unremarkable for Crystal, a sex addict, like the character played by Michael Fassbender in the new movie, Shame.

“People don’t usually associate sex addiction with women,” says retail manager Crystal, 42. “We’re normally the ones accused of making excuses before the lights go off but with me it’s different. I think about sex all day.”

Crystal, who lives in Brighton, was born in a Somerset town. Her parents split up when she was five and she puts her chronic addiction down to witnessing the breakdown of their marriage.

Relationships Crystal had in her 20s and 30s didn't last

“Looking back it was watching all this when I was very young that has made me the way I am,” she says. “I see the pain relationships cause.”

Crystal lost her virginity at 15 with a school friend, and believes she became an addict straight away. “I felt empowered after I lost my virginity,” she says. “I loved the feeling of being wanted so badly by the boy I lost it to.”

She was soon having sex with boys her age and bedding someone new every other month. By the time she was 17 she had slept with 40 people. “I didn’t think anything of it at the time,” she says.“I thought all the girls in my village were experimenting, too.

“I didn’t know 40 men was more than most women sleep with in a lifetime. All I knew was that I felt good about myself when I was having sex.”

Crystal claims she has always practised safe sex. She isn’t able to have children but ensures she doesn’t contract any STIs.

Between 17 and 20, Crystal began going to local pubs and clubs where she had plenty of chances to fuel her addiction.

And despite most of the men she slept with disappearing off into the night, she admits there have been times they’d want more than physical intimacy.

“I didn’t understand why they couldn’t just enjoy the sex and walk away,” she says. Like any addiction, if Crystal doesn’t get what she wants she feels moody and frustrated.

“I’d begin to feel hungry for sex,” she says. “I’d go on the prowl for men on my lunch breaks. If I didn’t manage to have sex I’d be unproductive all afternoon.

“At the weekends, I’d leave the house in the middle of the day to find men at pubs or coffee shops to pick up and take home. The feeling of satisfaction is almost instant.

“If I go without for a few days I start to feel desperately low, depressed and lack energy. I begin to see men as sexual objects. Walking along the street my mind races with thoughts of sex, especially with younger men.”

In her early 20s, Crystal assumed she simply had a high sex drive.

“Looking back I should have realised I had an addiction,” she says. “People call me easy, or assume I’m a slut not realising that it’s not something I can control.”

While she’s notched up more than 1,000 lovers, Crystal has managed to hold down relationships with some of the men she’s slept with. Her first came at 22 with Mark, then 19.

“We met in a club and slept together that night,” she says. “I told him about my high sex drive and he smiled like all his Christmases had come at once. For a while he kept up. I needed it at least five times a day. But when I started waking him in the middle of the night and first thing in the morning, he started to resist. I was so angry when he told me he couldn’t give me what I wanted, so after two years I went elsewhere.

“I got back one night and told him I’d slept with someone else because he couldn’t satisfy me.”

Inevitably they split and Crystal’s need for constant sex worsened. “Without a boyfriend, I became even more reliant on sex,” she says. “My life got out of control.

“On a bad day I’d have sex with seven different guys in 24 hours, sometimes a few at a time. It was difficult to fit it all in the day. I would sleep with a man in the morning, one at lunch and then as many as possible in the evening.”

Crystal moved to Brighton at 24 and met second boyfriend Dave, who was 21 when she was 26.

“We got talking at a friend’s house and he asked me out for a drink,” she says. “I wasn’t used to dates, but I liked him and agreed. I spent the whole evening wanting to leave so we could have sex, but enjoyed getting to know him and we were soon an item.

“We’d have sex five times a day, no problem. He’d meet me at work and we’d sneak into the stockroom.

“Things were going great for the first year until I found out he’d cheated on me.

“It was a shock. I’d found a guy who could satisfy me sexually, but the shoe was suddenly on the other foot.” Crystal retaliated. Angry and needing to know that men still found her attractive, she slept with as many men as she could. It continued for around seven years, during which time Crystal slept with around 400 more men.

As she hit 35, Crystal began to realise most of her friends were settling down, getting married and having families.

“Watching them was strange for me,” she says. “I still craved going out and meeting men, so I ditched them and made new, younger friends so I could carry on clubbing and going to pubs.

“I didn’t want to go to dinner parties and talk about current affairs. I wanted sex. And I wasn’t going to get it there.

She adds: “I never have a problem approaching guys. But every now and then I get ‘I’m not that sort of guy’, or ‘I have a girlfriend’.”

Open from the start about her high sex drive, Mike embraced it.

“For four years I thought I’d finally found the man who could provide for me sexually,” she says. But, inevitably, it ran its course.

“I loved Mike, but my cravings for someone new returned with a vengeance. I began sleeping with other men in secret and this went undiscovered for nearly a year.

“I felt guilty because I loved Mike, and I didn’t care about the men I was sleeping with, but it was the only thing that stopped the urge.”

Mike eventually found out about Crystal’s infidelity and she was devastated.

“She was angry with me because I was constantly trying to find younger men,” she says. “It was hard to hear, but forced me to acknowledge how my addiction was ruining not only my relationships, but also my friendships.”

At 40, Crystal finally confronted her addiction.

“I know I’m a sex addict, but I can’t face getting professional help,” she says. “Sex is the only thing that makes me feel good about myself. I’m a member of online dating website CougarLife.com, which helps me find men who can keep up with my high sex drive.

“I guess when the men start saying no, I’ll stop having sex. I know some people must think I’m a terrible person, but believe me I’m not proud of myself.” (MIRROR.CO.UK)