HANG TUAH NOT A GOOD LEADER 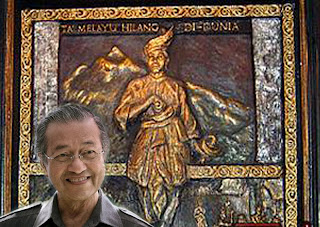 LEGENDARY.....A bronze sculpture representing Hang Tuah, which was once housed at the National History Museum in Kuala Lumpur.

TUN Dr Mahathir Mohamad waded into the on-going debate surrounding Hang Tuah’s existence in Malaysian history today, saying that the legendary warrior should not be admired as a leader.

The former prime minister also said that while “there must be some truth in the story” surrounding the tale of Hang Tuah, not everything should be believed.

He described Hang Tuah as someone who was 'too loyal' and did things that were 'not admirable.'

“Hang Tuah being looked at as a leader is wrong. Here is a man so servile, so very obedient, so loyal he could kill his friend for something he (Hang Jebat) did not do... of course Hang Jebat should not be seen as a good leader either,” Dr Mahathir said during a question-and-answer session at the Razak Lecture series here.

He said people should not believe everything written in the 'Hikayat Hang Tuah', and that stories on how the Malay warrior was able to travel all around the world and defeat so many enemies was unlikely to be the truth.

“Much of this is fiction,” he said.

The latest Hang Tuah debate was triggered when historian Tan Sri Dr Khoo Kay Khim openly disputed the Malay warrior’s existence and said that there were no historical records to prove that he was real.