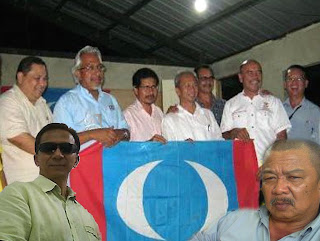 I WOULD like to commend my friend, Fairuz Bandar, for his decision to join the Parti Keadilan Rakyat in Tuaran. I also recognise that this is a personal choice and should be considered something normal in politics.

However, I feel that what he did was not the best of decisions simply because I feel his action has brought repercussions on the Sabah Suang Lotud Association. This is considering the fact that he was a former Private Secretary of Datuk Hajiji Mohd Noor, the UMNO assemblyman for Sulaman.

By his action Fairuz also left UMNO to become a member of the opposition. He is now still the Committee Member of the Persatuan Peladang in Tuaran, for which he was once the Chairman.

He should have called a meeting with the rest of the committee members and sought their advice before making such a drastic decision. As a leader of the association, he should have been more responsible on how his action could affect the association. It would have been alright if he was already in the opposition all the while, but for him to jump over at this time was quite a shock.

Now we have a situation in which Hajiji, the assemblyman, must have been slighted. Although most of the association’s leaders are pro-BN, Hajiji must now be reluctant to have anything to do with the association because of what Fairuz did.

There is also the good relations with Datuk Jahid Jahim, the PBS assemblyman for Tamparuli, which must have been soured although he had been very helpful to the association, including giving donations.

At least now the Lotud Youth Association (Persatuan Komulakan Lotud) is in a much better position with Datin Julia (Hajiji's wife) being its patron. There is such a thing as denying or postponing your own pleasures for the sake of the group.