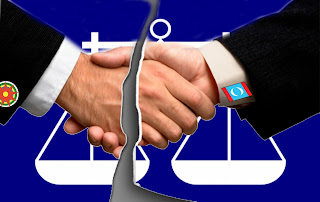 The recent visit by Datuk Seri Anwar Ibrahim this week was even more troublesome for them because Anwar made new additional promises that are causing the people to think again more positively about their future.

So what do the BN leaders do to react? They simply go through the same act of rewinding their record player and playing the same song to try to kill off the opposition’s promises, by saying as the Chief Minister said, “It is the norm for opposition parties to make all kinds of promises because they know they are not the ruling party and all their promises remain false promises. I believe the people of Sabah, know and understand that the promises made by the opposition are promises which are never fulfilled.”

Let’s take a careful look at this very old, much repeated dumb reasoning. First it believes the opposition will never come to power. But in Sabah we have seen this happen when Berjaya toppled Usno and when PBS toppled Berjaya. It can happen again. The tsunami of 2008 had shown that the bigger tsunami is on the way.

What the opposition is saying is that 'WHEN' (not 'if') we take over the government, we WILL give the people this and this and this. We will manage our resources better and more efficiently. Then, the government of today will not be able to give anything. So when the chief Minister said that "I believe the people in Sabah know that unlike the opposition, Barisan Nasional (BN) makes and keeps their promises” he purposely forgot that the BN can fall.

Surprise, surprise, we can go through a very long list of BN’s broken promises, e. g. to implement Sabah Baru in 1994, to eradicate poverty in Sabah by the end of 2010, to give equality, to eradicate corruption, to give independence to the judiciary, to give religious freedom, to withdraw all restrictions on Christians worship and practice, to build the Sungai Damit Bridge in Tuaran (a promise made in two elections already), to rid Sabah of illegals, to protect the land rights of the natives, etc, etc.

There are two things we can interpret from the CM’s remarks: 1. He is indirectly admitting that the BN won’t, or is not able to, give the 20 percent oil royalty, which the opposition says it can, easily and quickly, when it takes over the government, and 2. He thinks the people doesn’t believe the opposition.

The fact is, it is not whether the people BELIEVE these promises or not; it is a matter of whether they WANT these things. If they want them, and if they want change, they WILL VOTE for the opposition. What I don’t understand it, why isn’t the BN making the same promises to the people, if they really want to help the people and help improve the economy of the state?

Why doesn’t BN Sabah, or the CM, say, “We will give Sabah more than that, we will give 25 percent oil royalty if the people vote us back into power during GE13.” After all, this shouldn’t be a problem, isn’t it, because the CM says the BN can fulfil every promise it makes! But I guess, they don’t make such a promise because they have no intention to give it, not now, not ever, not even if they rule Sabah for the next 100 years! BN Sabah is just a stooge of the central BN so it can’t promise anything it can’t deliver.

Let’s keep in mind that the Borneo Alliance is promising that as the future ruling coalition for Malaysian Borneo, it will demand a royalty of not 20 percent, but 50 percent, from the Federal Government! If Acheh can get 70 percent from the Indonesian central government, there is no reason why this can’t be done for us. Borneo Alliance also takes the stance that all resources on Malaysian Borneo must he left to the management of the two Borneo states.

This is one thing the BN Sabah can never ever promise because it is subservient to the Federal Government. The Federal Government is sucking Sabah dry and the Sabah BN is its agent. You see, we in the opposition don’t see ourselves as the “opposition.” We are not “Pakatan Pembangkang” as the BN likes to call us, but we are the new agent for change, we are the force ushering in the future to change the worsening economic landscape to one that is vibrant, clean, equitable and growth-oriented towards a high-income society. We are the hope of the people, the flag carrier of the coming revival for the state. We are the future and we will deliver those 'empty' promises because the people want them fulfilled, not for us, but for them and their children.