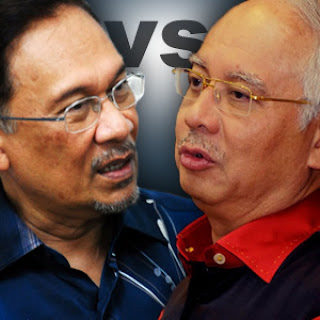 CAN you win a general election without having a debate and winning it? Curiously, Najib Tun Razak and Barisan National seem to think so but the principal opposing alliance Pakatan Rakyat’s Anwar Ibrahim do not seem to think so.

My take is, Najib Tun Razak and Anwar Ibrahim should debate about “more food, less fear, for future Malaysia.” But this is not going to happen.

The government has a vested interest in fudge. After all, there can be no opposition if there is no position. Its best hope is to muddle through the 13th General Elections and return with roughly the same numbers through a strategy of least resistance. What is less comprehensible is the response of the Barisan Nasional. It looks befuddled before fudge. Instead of raising issues, its spokespersons throw pebbles.

If you cannot clear a haze, the haze has won the day. The Pakatan Rakyat has been more successful in creating the tension of a debate, but its resonance is limited to a couple of pockets, while the Third Front is too thin to be considered a net, let alone a magnet.

This is going to be a cold election. Neither candidate nor party will be able to waft on hot air. If the Barisan Nasional wants to succeed, it has to remember a key fact: the young voter is outgrowing communal rhetoric. He wants more food and less fear. At the moment he is getting the reverse.

The UMNO has one advantage: Malays, its main vote bank, do not vote for something; they vote against someone. This suits the UMNO perfectly. It feeds fear to Malays, and offers development to other electorates.

Success breeds imitation, but change, the slogan which dazzled the US when Obama became President of America, will be insufficient in Malaysia. Frustration has stripped the Malaysian voter of illusions.

Offer him change, and he will demand to know to what. Promise him a job and he will ask where, when, how and to whom. Americans gave Obama a pass on delivery systems and destination.

The relevant slogan is not the one that ousted Pairin Kitingan’s Sabah government in 1994 state election despite PBS securing a victory, but the one that laid out Pairin 18 years ago: It’s the economy!

Since no government in its senses would want to contest an election on the economy when jobs are disappearing in cities and farmers are finding hard to sell their produce because of the escalating prices on seeds, fertilizers and chemicals and even the rising animal and poultry feed prices is hitting poultry processors hard, the Barisan Nasional/UMNO seems poised to offer a virtuous trinity of vitality (Khairy Jamaludin), morality (Najib Tun Razak) and nobility (Rosmah Mansur).

The voter will, however, check for substance behind the advertising. The chief minister of the biggest Barisan Nasional state, Sarawak, Taib Mahmud, has become synonymous with illegal land grab, a thousand plots of land acquired in recent years by the state, much of which have been passed on to Taib’s close relatives and cronies at dirt cheap premiums.

Many of these plots of lands, which total more than 1.5 million hectares, were in fact NCR lands, secretively sequestered from the natives. Taib has lost the plot. Or, more accurately, he has sold the plot.

The arithmetic of a cold election will be determined by the sum total of regional numbers. The formation of the next government could depend on how well the allies, rather than the principals, do. The Pakatan’s partners seem more confident than the Barisan Nasionals’ friends. But such is the perceived fluidity of options that Anwar Ibrahim, Tuan Guru Hadi Awang, Lim Kit Siang, see themselves as possible occupants of Putrajaya.

They may not agree on anything else, but they believe that neither the Barisan Nasional nor the Pakatan Rakyat will cross the 111-seat mark necessary to become the plank on which a government can rest. The politics of the 90′s and the 20′s has seen the rise of flexible morality leading to an explosion of opportunity in March 2008 GE12.

Will the politics of the 2010′s be different? Yes. There is likely to be fatigue in West Malaysia with the insular dynamics of regional parties in Sabah and Sarawak, trapped in concentric rings of family and state; and a yearning for political formations that offer more than stagnant regional horizons.

The next government in Putrajaya, like this one, might be less than the sum of its parts, rather than more. There are no institutional methods of re-nourishment once the leaders of small parties in Sabah and Sarawak become vulnerable to age or accident.

You might then, with good reason, consider 2008 the semi-final election. The finals will take place in the elections after this, probably this year 2012, when the Barisan National and the Pakatan will square off in most parts of the country, sufficient to give one or the other over 111 seats. They will have younger, if not newer leaders, creating the base for Sabah and Sarawak to be the kingmakers in Putrajaya.

The debate will not change, because the problem will not have been resolved. Whoever wins the argument on food and fear in 2012 will control the decade.