PBS SHOULD BE BLAME ON RCI FIASCO 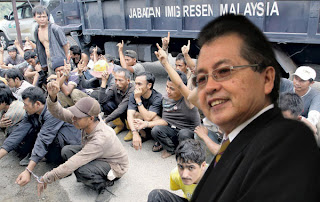 PARTI Bersatu Sabah (PBS) and all other BN party components from Sabah should be ashamed of themselves because they have failed to convince the UMNO-led Federal Government to set up a Royal Commission of Inquiry (RCI) on illegal immigrants and fake MyKads in Sabah.

PBS president Joseph Pairin Kitingan, it seems, though repeatedly said in the newspapers that PBS wants an RCI to be set up by this year, nothing seems to be happening except a half-hearted support from Sabah UMNO for the RCI.

Why wait by this year to set up the RCI is a big question mark. If PBS is convinced RCI is what Sabahans had wanted all along and that it was a right thing to do, Pairin then should have compelled the Federal leaders including Prime Minister Najib Razak, to set up the RCI even last year !

Why wait until close to a general election? Did they share an intention to mislead the Sabahan voters on the eve of an election?

Now PBS information chief is blaming PKR leader Anwar Ibrahim for the downfall of PBS in 1994, accusing him the UMNO's master strategist of its downfall. Did Mositun realise that Anwar was not alone in UMNO then to bring down a PBS state government?

Did not Mositun know now that he is sleeping and collaborating with those strategists now in UMNO who were once in the team to bring down PBS?

Did not Mositun realise that his party PBS is now working hand-in-hand with the same UMNO leaders who brought down PBS and Pairin from power to deny Pakatan Rakyat from fulfilling its pledge to set up the RCI if it comes into power ? At the very least, Anwar and PR for that matter have agreed to set up RCI if PR forms the Federal Government !

Having said that, SAPP is perplexed that Mositun failed to see that it is PBS leaders like him now who stands in the way for the setting up of the RCI on the perennial problem of PTI in Sabah ! PBS and UMNO are working together to deny Sabahans of a Federal Government that would set up RCI. This is utmost hypocrite.

Or is it too difficult for PBS leaders to just be very honest and tell the people to vote for the party that listened to them and set up the RCI ? PBS leaders should apologise to us Sabahans for failing to ensure we are heard by the Federal Government.