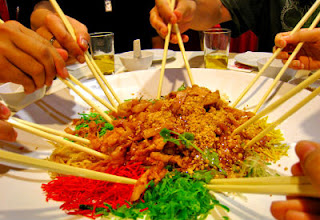 A PLATE of raw fish and julienned vegetables was all it took to reignite a 'food fight' between Singaporeans and Malaysians. Following food ownership debates over bak kut teh and Hainanese chicken rice, the bone of contention this time is the popular Chinese New Year dish yeesang.

The hullabaloo first erupted at the northern end of the Causeway earlier this month, when Singaporean celebrity foodie K.F. Seetoh first drew attention to a finance and accounting professor's Facebook page that revolved around local heritage.

Writing in his weekly food column in The New Paper on Jan 3, Seetoh noted Professor Tan Wee Cheng's list of six things in Singapore that he would like to see entered on Unesco's Intangible Cultural Heritage list. The items are the ritual and custom of serving yeesang, Singapore cuisine, Singlish, Nine Emperor Gods Festival, the yumseng ritual in weddings and getai performances.

Yeesang is a raw fish salad served in a predetermined sequence, with the server reciting wishes of luck and prosperity evoked by the names of the ingredients used.

But Prof Tan's suggestion quickly sparked strong protests from across the Causeway after it was reported in the Malaysian media, which is believed to have picked up Seetoh's column. (The Straits Times/ANN)