POLICE REPORT OVER CASH FOR BB1M 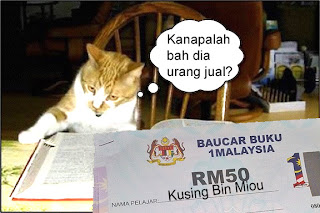 Nicholas Lee, director of Zenithway Sdn Bhd, formerly known as The Penguins Bookstore, said the bookshop received a call from a personnel of Masterskill Likas saying that students were approached by people claiming to be staff from Zenithway last Friday.

The students were told that they could exchange their RM200 worth of vouchers for RM180 in cash. The bookshop immediately lodged a police report on the same day. In a press conference here yesterday, Lee clarified that the bookshop would only accept the vouchers in exchange for books.

“Prior to that there have been students from Universiti Malaysia Sabah (UMS) and Universiti Teknologi MARA (UiTM) who asked if they could cash in the book vouchers,” he added. Lee further clarified that the bookshop did not send any personnel to universities and colleges asking students to cash in their BB1M.

He added that an email has been sent to the Ministry of Higher Education on this matter and a notice has been put up at the bookshop accordingly. (BORNEO POST)