THIEF CAUGHT WITH OVER 10,000 PANTIES 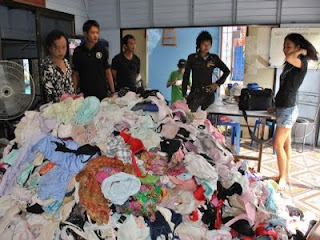 POLICE in Thailand had apprehended a thief with more than a thousand pairs of women's underwear in the trunk of his car.

Police also found more than 10,000 pairs at the house of the 48-year-old Thai suspect, who was arrested late on Tuesday with an accomplice after breaking into a building in Bangkok's Chinatown.

They said the man admitted to stealing and collecting women's underwear since the age of 18.

"He smelled them all the time even while driving," said police Major-General Saroj Promcharoen. (Agencies)