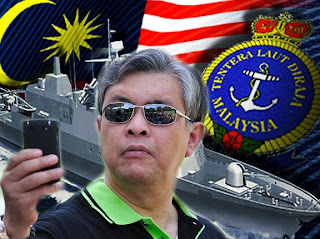 I KNOW many of you are excited about the cow scandal now engulfing 'Women, Family & Community Development' Minister Dato’ Sri Shahrizat Abdul Jalil. But that’s peanuts compared to what’s cooking at the Defense Ministry. It’s comical and unfair for some UMNO leaders to ask Shahrizat to resign when they are all in the same pot.

Four months ago, I wrote about Defense Minister Datuk Seri Zahid Hamidi and Co. wanting to purchase six more Second Generation Patrol Vessels or SGPVs for the Navy. The story was ignored by the public and so I have to write this again.

Some of you will recall that when the Government decided to privatize the Lumut Naval Dockyard in the early 1990s to the man with the white hair Tan Sri Amin Shah Omar, that exercise also entailed the Government buying six patrol vessels from him for the Navy.

Amin Shah ordered the vessels from the German company Blohm + Voss. Apart from procuring the six patrol vessels, Lumut Naval Dockyard (now Boustead Naval Shipyard ) also paid RM300 million for their design so that we could build additional units ourselves if we needed them in future.

“Malaysia Boleh..! ” was, after all, the rallying cry then, and our defense officials have never failed to brandish the catchphrase, “ransfer of technology".

Fast-forward 15 years later and our current Defense Minister has decided to buy another six patrol vessels. It will cost more this time, naturally, since these are second generation SGPVs with a new design to be built by another company, DCNS.

Why we are not using the design that we paid so much for is something we should be thinking about. And why Zahid and Boustead Naval Shipyard have decided to change our supplier to DCNS is anybody’s guess.

All I can confirm is that DCNS is a famous company because DCNS supplied us Scorpene submarines (a deal in which someone equally famous got RM500 million in 'duit kopi").

DCNS is also involved in a corruption scandal in Taiwan, where they had been sued by the Taiwan government for recovery of more than USD1 billion for a kickback scandal.

So how much will this new procurement cost Malaysian taxpayers? The new vessels’ combat and management system will be decided by some foreign consultants and not by the Royal Malaysian Navy, so your guess is as good as mine.

But it’s not just the money I am worried about. The consultants are Singapore based companies. Are they not foreigners? What if they recommend a system that compromises our national security? What assurance do we have that these consultants are not our enemies?

Every time we question the Government’s secrecy in the procurement of defense equipment, we are told that it’s in our national interests to be kept in the dark.

Now I know why. I am certain that input from our Royal Navy into this very important procurement has been minimal at best. So we can expect an announcement later that will sound something like this:

the base price for the vessels is RM10 billion while the maintenance, training and parts contracts will cost RM1 billion a year for 10 years.

That means Tabung Angkatan Tentera, which has the controlling stake in Boustead Holdings, and ordinary Malaysians (who will be getting RM500 soon) must be prepared to shoulder the burden of a RM20 billion defense contract for vessels that neither you nor I can even be sure we need.

I know many of you are excited about the cow scandal now engulfing - 'Women, Family & Community Development' Minister Dato’ Sri Shahrizat Abdul Jalil. But that’s peanuts compared to what’s cooking at the Defense Ministry.

It’s comical and unfair for some UMNO leaders to ask Shahrizat to resign when they are all in the same pot. For the moment, I hope our Defense Minister or Prime Minister can answer three simple questions :

Firstly, are we buying the six patrol vessels from DCNS and for how much? Secondly, why were foreign consultants engaged, to the exclusion of the Navy, to recommend combat systems and other sensitive components of the vessels? And thirdly, why are we not having a competitive bid for this project? I hope we can get some answers soon, before the General Election.