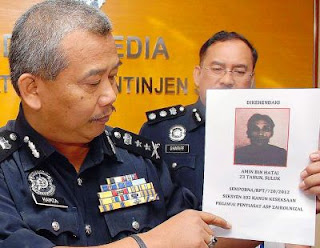 WANTED... Hamza showing the photofit of Amin Hatai during a press conference in Kota Kinabalu Wednesday.

THREE members of a family were brutally slashed to death by assailants in what is suspected to be a revenge attack over unsettled debts. One of the assailants was also killed.

The men, armed with machetes, set upon plantation worker Ismail Jaafar, 50, and his wife Salmiah Iran, 46, while they were resting at the workers quarters at an oil palm plantation in Kalumpang, about 20km from Semporna town.

Ismail's 70-year-old father was also killed in the attack at 5.30pm on Jan 22. One of the assailants, identified as Jul Mohd Nan, 37, was also killed following a struggle with one of the victims.

Sabah Commissioner of Police Datuk Hamza Taib said yesterday the bodies of Ismail and his father were found at the workers quarters while Salmiah's remains were found in a nearby plantation at 3.40am the following day.

“We believe she had run into the plantation after escaping the attack but collapsed due to serious injuries and died there,” he said, adding that the victims were slashed multiple times on the neck and body.

Hamza said the couple's three children, aged between 13 and 18, and two other relatives escaped unhurt.

“The assailants had rented a lorry to come to the plantation,” he said, adding that police had brought in the lorry owner to help in investigations.

“The killing could have been fuelled by revenge, probably over unsettled debts, but we are still investigating.”

He said the assailants had sent Jul's body back to his home at nearby Kg Tagasan Jaya before fleeing. Following the murder, Hamza said police had detained three men.

“We are looking for nine more men including another key suspect a 37-year-old man by the name of Amin Hatai,” he said, noting that police recovered five machetes at the crime scene. (STAR)