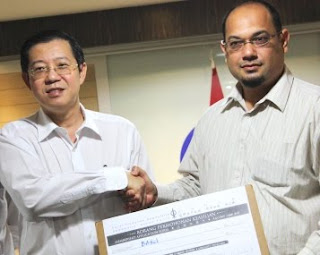 LIM KIT SIANG predicted that the Malay influx into DAP will continue, in spite of the party being branded 'Chinese Chauvinist' and anti-Malay.

Anticipating already the wrath of Barisan Nasional’s (BN) key leaders, Prime Minister Datuk Seri Najib Razak and his deputy Tan Sri Muhyiddin Yassin in particular over his prognosis, the DAP veteran forewarned them today that 'no force in the world' could stop Malays flocking to DAP.

“Let me inform the Umno leaders that this is the tide of the times and no force in the world can stop more Malays joining up with other Malaysians from other ethnicities in DAP to build a common destiny as Malaysian citizens for future generations of Malaysians,” he wrote in a statement here.

“Umno Youth leader Khairy Jamaluddin was sufficiently upset at Malays joining DAP as to even come out with a public statement,” Lim (picture) scoffed.

He stressed that since DAP’s formation more than four decades ago, the party had always been committed to its multiracial cause and had always been the forerunner of the 1 Malaysia policy, just recently mooted by Najib when he became prime minister in 2009.

DAP, added Lim, had never been anti-Malay, anti-Islam or anti-Malay Rulers and was merely labelled as such due to the “political insecurities of Umno leaders”.

“They (Umno) have subjected the DAP to an unrelenting assault with lies and falsehoods, as in the irresponsible exploitation of the 3R cards of race, religion and raja Melayu against the DAP by both Najib and Muhyiddin at the recent Umno general assembly,” he said.

To prove DAP’s multiracial stance, Lim pointed out that the party had never before been hauled in to face the Registrar of Societies for violating Section 2A (1) of the Societies Act 1966, which prohibits organisations from violating the Federal Constitution.

“DAP will be celebrating our 46th anniversary on March 18, and during the four-and-a-half decade of our struggle, DAP had never been once asked by the Registrar of Societies to show cause why we should not be deregistered for opposing or undermining the fundamental features of the Constitution, whether with regard to Islam as the official religion or the system of constitutional monarchy,” he said.