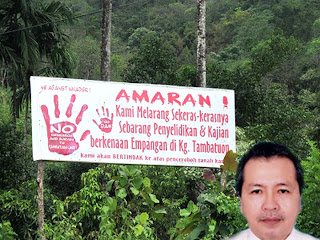 TO SABAH Progressive Party (SAPP) and for the villagers in Kadamaian as a whole, the only effective way to 'cancel indefinitely' the proposed Tambatuon Dam over Kadamaian River is to vote out its own proposer, the Barisan Nasional (BN) government!

You cannot hold onto any of the BN pledges not to go ahead with the controversial dam. Even the Kota Belud MP's words are not an assurance it will not be built. It maybe not this year, but they will surely build it maybe in 2013. We never know with this kind of statements.

MP Rahman Dahlan it must be noted had not said the dam will be cancelled. What he said was the dam would not be built without the consent of the villagers. In fact he had asked the villagers to reconsider their opposition to the half-a-billion ringgit dam.

So Tambatuon village head Amin Goling's support for Rahman's statement is nothing more than confusing and hoodwinking the Kadamaian folks especially in his own kampung into believing the BN government misleading words on the dam.

This was evident from the statement by other Tambatuon folks today which abhor Amin's premature support and words of thanks to BN over Rahman's statement.

So, folks, the one and only most effective method of cancelling the proposed dam is to 'cancel' its proposer the BN, and of course its supporters in the fashion of UMNO's allies, PBS and UPKO.

They should be discarded logs, stock and barrel, at the coming general election if we want to be heard.