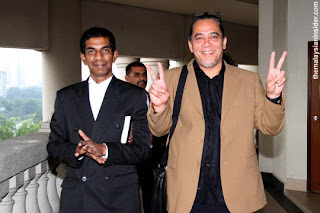 VICTORY….Ahirudin (right) gives the V-for-victory sign outside the court after his statement of apology was recorded in chambers on January 31, 2012. Picture by Choo Choy May.

The suit pertained to articles and postings that had been published, or permitted to be published, by Ahirudin in his blog Rocky’s Bru. In the suit, the four claimed that the articles referred to them were defamatory.

The apology was read out today in chambers at the KL High Court today in front of Datuk Asmabi Mohamad.

Ahirudin also agreed not to publish any similar allegations concerning the plaintiffs on his blog or any other website online in the future. Under the terms of agreement, Ahirudin will also publish a statement of apology on his weblog.

“He (Ahirudin) was present in court today to express his sincere and utmost regret for the consequences caused to the plaintiffs,” said NSTP lawyer Rishwant Singh, adding that there was no order as to costs and damages.

In a statement, Kalimullah said he and his former colleagues were glad that the matter had been settled, and that it had caused “undue stress, damage and anguish to our families, friends and us personally and professionally.”

“The repeated lies over a long period of time and the unfairness of it all led us to the painful step of filing the legal suit against Ahirudin to clear our names and reputation. Having come from the same press fraternity, it was not a decision we took lightly when we went to the courts to seek justice,” said Kalimullah.

He pointed out that Ahirudin’s apology made it the sixth one he had received in less than a year, the others being from DAP MP Jeff Ooi, the NST, Berita Harian, Utusan Malaysia and Matthias Chang, a former political secretary to Tun Dr Mahathir Mohamad.

“It re-establishes my faith that eventually the truth will prevail and that justice will be done,” Kalimullah said.