MUSA AMAN WILL BE BACK FOR BETTER FUTURE 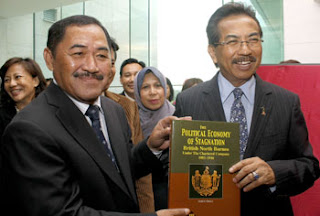 MUSA AMAN will be back in the saddle even after the 13th General Election which is expected anytime now. As he returns to Sabah, a third term, as the longest serving Chief Minister of Sabah, and who has broken the 9 years jinx.

After generating a hope for the better for the average man on the street, I am reminded of what a former Chief Minister of Penang a distinguished doctor a political strategist par excellence the late Tun Dr Lim Chong Eu who had once told my late father and me when we visited him after he lost the 1990 Padang Kota state seat to Lim Kit Siang of DAP.

As Chief Minister of Penang since 1969, he was able to generate a growth rate of ten per cent and more, brought in top Foreign Direct Investment (FDI) in Billions of US$ and thousands of jobs were created when he brought in big name electronic multinationals like Intel, Motorola and many more. “And still people voted me out,” he acknowledged.

“It was a rude awakening for me. I then realised that a high economic rate of growth is no indicator of human development.”

This is exactly what Musa Aman did. And true to what Tun Dr Lim Chong Eu had said, people of Sabah had voted Musa Aman back to power in 2008 with almost 98.33% success, winning 59 out of the 60 seats contested. Musa Aman invested in the people, and the people paid back.

A high growth rate of 5 per cent between 2004 and 2008 is not the reason why Musa Aman had been voted back in 2008. Restoring the right to freedom and good governance was certainly the first step. Simultaneously he followed it up with various development initiatives, which mainline economists would wrongly classify as populist measures.

Providing free milk, food supplements, textbooks, uniforms, shoes to school-going children, and reserving seats for women in JKKK and local bodies was part of the social engineering that he undertook. Program Pembangunan Rakyat Termiskin (PPRT), was introduced to assist the hardcore poor.

The programme established a register on the profile of hardcore poor households and contained a package of projects tailored to meet their specific needs, such as increasing their employability and income, better housing and educational assistance.

Direct assistance was given to the hardcore poor who were disabled and aged. In addition, the hardcore poor were provided with interest-free loans to purchase shares in a unit trust scheme (ASB-PPRT) so that the dividends can supplement their income. With the foundations now well laid out, the challenge Musa Aman faces in his third term are not only formidable but if attempted in a more realistic and holistic manner can even chart out a new future for the country.

Unlike most other political leaders, I found Musa Aman to be more receptive and sensitive to the needs of the poor and marginalised. While the Sabah verdict amply demonstrates his willingness to improve the lot of the masses mainly the natives.

And the 2012 state budget amounting to RM4.048 billion the highest and biggest budget ever allocated and announced in the history of Sabah Government is a clear example that Musa Aman cares for Sabahans.

With 80 per cent of the population involved in farming, Sabah’s future revolves around agriculture. Except for rice which is still imported, Sabah is trying to attain self-sufficiency in food production and produces surplus vegetables both highland and lowland vegetables, surplus of poultry and eggs, surplus of marine fish, surplus of milk, but, the fact remains that the State still has a large proportion of population which is poor and there is still poverty.

The challenge therefore is on how to bring a synergy between agriculture and food security; on how to turn agriculture economically and ecologically sustainable in a manner that it does not lead farmers in distress to sell off their land to ‘outsiders’ and become landless and at the same time provide food and nutrition for the masses. A healthy agriculture is also the first line of defence against poverty.

Sabah therefore needs to discard the Green Revolution approach. It has to stop poisoning its soils, contaminating the water bodies and the environment and pushing more and more farmers out of agriculture.

Sabah needs to shun the industrial model of farm growth, and build an ecologically sustainable farming model driven by a futuristic vision. Agriculture has to be re-designed and linked with its own traditional time-tested public distribution system – where the communities have been in control and have managed the food needs in a kampong.

Instead of chemical fertilisers, vermi-composting as a cottage industry has to be encouraged on a massive scale. This will restore soil health, increase crop productivity, and reduce greenhouse gas emissions. It will also generate more rural employment.

Chemical pesticides need to be eliminated besides its so expensive, I know I was in this industry in the past. Sabah can learn from the ‘Non-Pesticides Management’ system of agriculture from Indonesia and Thailand. No chemical pesticides are applied in over 50,000 hectares in Indonesia, and yet the crop yields are very high.

Driven by its increasingly successful adoption by farmers, Indonesia plans to raise the area under no-pesticides agriculture to half-million hectares by the year 2014. If this can happen in Indonesia, there is no reason why Sabah cannot learn from its success.