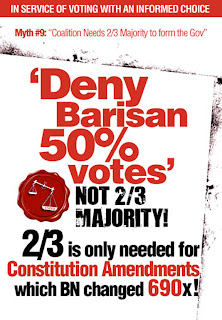 Malaysia has never been an Islamic State as our Constitution is very specific on it. It was the Mental Mamak (our equivalent to Singapore 's MM) who lied all the way when he declared Malaysia as an Islamic Country and therefore State in 2001.

Lim Kit Siang immediately corrected him but he being the person he is insisted that he was right. Jokers like Ling Liong Sik, Samy Vellu and Lim Keng Yaik of course did not object and quietly agreed with him and so did the other BN leaders. This mamak has damaged our country through and through.

MM also passed the Syariah Law in Selangor in 1995 with the help of MCA, MIC, and Gerakan.

Ask MCA, MIC and Gerakan why they support an Islamic State and passed laws to support it, and now complain that DAP is supporting an Islamic State, when DAP has never ever agreed to do so. The evidence is beyond doubt, it is in the public domain, ask them, the shameless ones, do they have an answer?

Worth listening to this recording. Our constitution is the most altered, amended, and modified constitution in the whole wide world. We must never ever let UMNO get back their 2/3rds majority ever again. If they do, then our country will go to the dogs.

UMNO will again start changing the constitution like there is no to-morrow. It will be changed to suit UMNO, just like they changed the constitution/rules/laws to allow for gerrymandering of the consituency, where a rural constituency with an electorate of 5,000 voters is entitled to vote for one MP/DUN, whereas in urban localities, an electorate of 100,000 can only vote for one MP.

What sort of democracy do you call this? Can someone out there enlighten me. Whether you're pro-BN or pro-opposition, please, do not, in your wildest dreams ever allow UMNO their 2/3rds majority. Don't ever let Malaysia go the way of Zimbabwe , Somali, or Myanmar .

An interesting speech by Dr. Azmi Sharom; an Assistant Professor of Law at UM. He explains the CONSTITUTION: the Malaysian supreme law. Listen to this, it's interesting and refreshing.

"For people who think that only BN can govern properly. Think again. Once BN gets back their 2/3 in Parliament they will start amending the Constitution. Then we won't have the Constitution that protects ALL. Educate yourself about what the supreme law of the land says. Then vote wisely."