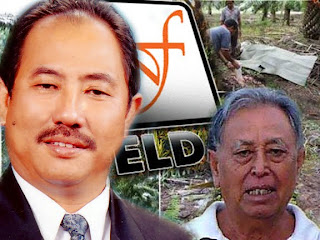 SABAH Progressive Party (SAPP) said it is surprising that it took former Chief Minister Tan Sri Harris Salleh to raise the issue of the fate of 300,000 acres of State land allocated to Felda to be developed for 20,000 settlers from the East Coast.

Its Information Chief, Chong Pit Fah, said this in response to the Daily Express front page report on Harris urging the Federal Government not to proceed with the listing of Felda Holdings, especially involving the said Felda land in Lahad Datu.

"It takes Harris, a strong Barisan Nasional (BN) supporter to make the issue public. Why is the BN State Government remaining silent over this matter and did not take immediate action on it, especially when it concerns State land and 20,000 settlers?" he asked.

He said allowing the said land to be involved in the listing of Felda Holdings would not only defeat the purpose of the State Government allocating it to Felda, but also indicate that State leaders are actually involved in trying to benefit from the listing.

He said the party shared Harris' fear that by listing Felda and its shares traded in the market it means anybody can buy including foreigners and not necessarily landless Malaysians, saying the party is also concerned that certain individuals in Umno are behind the listing move for their personal gain.

The listing move has nothing to do with enriching Felda Holdings or the settlers under it but just for the personal gain of certain Umno leaders, he said, hoping the settlers concerned will also object to the move.

Harris, in the report, said the people feel the exercise is very dangerous economically and will deprive the people of Sabah of land, especially bumiputeras.

Harris also reminded that the main objective of the government allocating nearly 300,000acres to Felda was for the development of oil palm plantations for 20,000 settlers from the east coast.