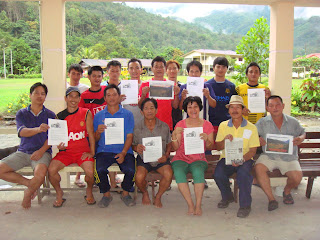 THE TAMBATUON Villagers’ Action Committee headed by Jahim Singkui demanded a letter from the government to scrap the proposed half a billion Ringgit dam project if they (the government) is sincere to stop the project once and for all, instead of just saying that the people can sit down and talk properly through the proper channel.

Jahim said their committee had from the beginning objected to the proposed dam by going through the proper channel in writing to the Kadamaian assemblyman, the Kota Belud Member of Parliament and also forwarded a memorandum against the proposed dam to the Chief Minister's department but unfortunately till today, there is no reply to their letters.

In response to the statement by the Village Chief Amin Goling urging the people in Tambatuon to continue supporting the present government, Sabah Progressive Party (SAPP) Kadamaian Chairperson Agnes Liewpin who visited the village folks this afternoon, obtained confirmation from the Tambatuon Villagers’Action Committee that there will be no further negotiations allowed as stated in Dato Rahman statement last week. The villagers’ stand to reject the proposed dam is clear and firm.

Jahim who forwarded their letter to Dato Rahman urging him to scrap the project on his last visit, also extended a copy to Agnes. Dato Rahman told the people during his speech that he will ask Noh Omar not to list the dam project in the 2012 budget. However he also told them to be ready to sacrifice for the sake of development which was confusing the people of Tambatuon.

“His statement is vague and unclear, so will he be going to list the dam project in 2013’s budget?” Jahim questioned.

Agnes assured the Tambatuon folks that SAPP Kadamaian will continue working together with them and fight for the rights of the people till the end. She further said that the state BN leaders are like puppets and parrots who just follow what their KL bosses tell them.

“These leaders lack courage and the guts to defend the very people who put them where they are today,” she said.