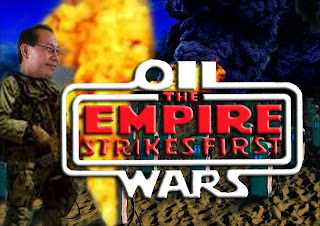 THE OIL royalty issue took centre stage during Chinese New Year, with Anwar pledging 20 percent if Pakatan comes to power, Jeffrey demanding 50 percent while there also those pushing for 70 percent.

Jeffrey’s State Reform Party (STAR) wants a hike in the present measly five percent oil royalty to 50 percent, covering both the inner and outer waters. More on this in a while.

Earlier, just before Chinese New Year, the Sabah Progressive Party (SAPP) revealed its economic plan which, among others, held out without much hope for a 20 percent oil royalty. The party’s other ideas for the oil and gas resources are to try and squeeze export duties, excise, and land taxes.

Anwar, meanwhile, in a fiery speech on the need for a change of the system from the present one based on race to an alternative model (read: Pakatan Rakyat) based on equal rights, promised 20 percent oil royalty to Sabah and Sarawak. Jeffrey, who was present, looked on impassively.

The fact that no one in Sarawak has so far had the guts to demand an upward review in the oil royalty seemed to be beside the point for Anwar. What Sabah gets, Sarawak too will get.

Indeed, the Sarawak leaders have so far been falling all over themselves – the opposition has been silent – to reassure the people that the measly five percent is more than compensated by generous financial allocations from the federal government. No doubt this explains why Sarawak is the second poorest state in Malaysia after Sabah.

Back to Anwar: he gave no details as usual on his 20 percent oil royalty pledge beyond warning this time that the monies will not be handed to local leaders through so-called projects but will instead be channelled directly to the people.

The pledge was one he has made before, beginning with the 2008 general election, and stepped up during the aborted and/or thwarted Sept 16, 2008 “people’s revolution”.

Too little, too late

But at least in Anwar’s case, he knows where he is going with the 20 percent pledge. He intends to honour the pledge when, according to him, his opposition alliance seizes the reins of power.

In Jeffrey’s case, he provides more details than Anwar, he (Anwar) will probably claim it is a work in progress, but not enough, according to his (Jeffrey’s) younger critics, “and no hope in hell of ever making his claim stick”.

Jeffrey’s critics and by extension Anwar’s fume that even his 50 percent oil royalty demand “is not good enough” and is “a case of too little, too late”.

They want a 70 percent oil royalty backdated to 1976 when a controversial oil agreement was signed between the federal and Sabah and Sarawak state governments.

The benchmark is the various oil-producing provinces, in neighbouring Indonesia, which get 70 percet. The extreme are the Muslim republics in the Russian Federation which get to keep all their oil and gas revenue.

Hence, the critics consider the oil agreement invalid. Also, the people were not consulted, they point out.

Moreover, two former Chief Ministers – Mustapha Harun and Mohd Fuad Donald Stephens, refused to sign the oil agreement, both holding out for a much higher oil royalty of 20 percent or more.

Another factor against the oil agreement was that it was signed by former chief minister Harris Mohd Salleh within days of the death of Stephens, his predecessor, in a fiery air crash under mysterious circumstances which, except for the intervention on the part of Harris, would have taken more lives. These included, among others, then Sarawak chief minister Abdul Rahman Ya’kub and federal finance minister and Petronas chairman Tengku Razaleigh Hamzah.

Still, there’s no hope that the federal government under the Barisan Nasional will ever revise the oil royalty, and if by some miracle they do, it’s likely to be confined to the inner waters only and be no more than 10 percent at the most.

The thinking is that there is a case for taking the oil royalty issue to the United Nations and the international community based on the denial of oil royalty from the outer waters and the virtual theft of oil and gas since 1976 by the federal government.

Should the young critics win the day on the oil royalty issue, Jeffrey’s other ideas can come into play.

The local hero in Sabah politics envisages a holistic development of oil and gas resources under his party’s master plan. The federal government has paid little heed to the development of downstream oil and gas industries in Sabah and Sarawak. Instead, Petronas has focused on development such as infrastructure in the non-oil states.

Anwar, under his 20 percent pledge, may also do well to adopt the other ideas in the Jeffrey’s master plan.