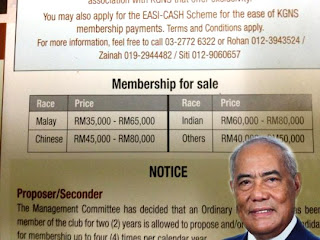 A PHOTOGRAPH of a membership price list for one of the country’s most prestigious golf clubs that apparently charged by race triggered an outcry on Facebook, with many condemning the different rates for the different races.

This comes after a race controversy erupted over the ownership of bread companies Gardenia and Massimo, reflecting the dire state of affairs in Malaysia where race remains a smouldering issue that permeates many facets of life.

Reactions to the photo, which was posted on Facebook community page “Malaysia”, ranged from disgust to defensive.

“Malaysia and Spore is the only country that allow companies to advertise ....preferably chinese, or malay or indian...so am not surprised of this la...,” said Julian Maria Intachat.

Some respondents, who appeared possibly to be foreigners, chose to respond with humour.

“So many forms in Malaysia ask ‘Race?’ I simply write ‘human’ noone has ever questioned this” said Chris Frankland.

When contacted, KGNS president Tan Sri Megat Najmuddin Megat Khas said the notice in the picture was put out by a finance company and had nothing to do with the club.

He said that while KGNS had long practised racial quotas to ensure a good mix of races in its membership, it had never mandated the prices at which memberships could be sold.

Megat Najmuddin said that due to the race quotas, a member can only sell his or her membership to a person of the same race but at any price they wished and the rates in the notice could be reflective of supply and demand among the different racial groups.

He stressed however that the prices that appeared in the notice were just “indicative” and that the club’s philosophy of imposing race quotas was a noble one and not sinister.

“We are the most multi-racial club in Malaysia,” he told The Malaysian Insider. “If you go to other clubs you see it dominated by one race or the other.”

Megat Najmuddin, who also sits on the Umno disciplinary committee, said it was sad that in Malaysia it was getting rare to find the different races mixing together.

“In KGNS, you have all the races mixing together,” he said.

Megat Najmuddin said KGNS is ‘the most multi-racial club in Malaysia.’

The KGNS president said there have been no cases of members being unable to find a buyer for membership from his or her own race.

“This race quota policy has been a cornerstone of the club and no member has ever asked for it to be removed,” he said.

KGNS, the only club in Malaysia incorporated by an Act of Parliament, limits Malays to 45 per cent of its membership, Chinese to 35 per cent and Indians and others to 20 per cent.

When contacted, “Zainah”, one of the names listed on the notice, immediately started denying having anything to do with the notice.

Calls to the rest of the numbers listed on the notice were not picked up or returned.

Megat Najmuddin said he did not know the finance company behind the notice but criticised the photo as “mischievous” for making it look like it was the club that had issued it.

Race often remains a source of tension when it comes to official matters, although Malaysians of various ethnicities get along well in their daily interactions with much visible racial harmony.

Thanks to affirmative action policies, Malays and other Bumiputeras are given privileges such as easier access to government contracts, funding, licences, scholarships, educational institutions and housing in an effort to narrow economic disparities between the racial groups.

Proponents of this approach, such as former Prime Minister Tun Dr Mahathir Mohamed, maintain that without such aggressive affirmative action the country would descend into chaos.

Critics of the country’s race-based policies however say that it has been hijacked and abused by an elite minority and was also damaging the country’s competitiveness, with most recently University of Malaya Vice-Chancellor Tan Sri Dr Ghauth Jasmon being quoted in the Malay Mail as saying that race quotas should end for the sake of education standards.

The Najib administration has apparently begun to address some of the weakness in the race-based approach, admitting that some of the past practices were too “blunt” to be effective.

The prime minister also introduced his hallmark 1 Malaysia campaign to unite the country although many maintain that the country is united by default and political parties are the source of problems.

“The more valid question is what happened to 1 Malaysia. Looks like 4 Malaysia to me,” said Chong Kok Shyong in response to the photo which was also posted on the Facebook page “1,000,000 Chinese dont want MCA to represent the Chinese”.