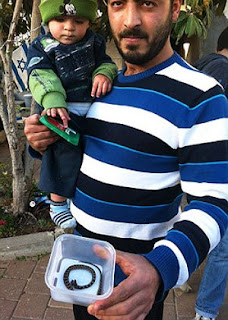 A SLEEPY snake came to a rather untimely end after having its head half chewed off by a fearless toddler in an Arab town in northern Israel, the child’s family told AFP on Friday.

Thirteen-month-old, Imad Aleeyan, who has six teeth, was found chewing on the head of the 30-centimetre snake by his mother, who alerted the neighbourhood with her screams.

"I was making his milk and I looked over and saw he had a snake in his mouth," said his mother, Ghadir Aleeyan who lives in the town of Shefa Amr, 15 km east of the port city of Haifa.

"I started to scream. I couldn't believe my eyes," she told AFP. "I nearly died of fright."

Her screams brought the rest of the family - and the neighbourhood - running.

"We rushed in and found the baby with a snake in his mouth, chewing it. It was really scary, just horrible," the boy’s aunt, Yasmin Shahin, said.

A neighbour who had rushed to see what was going on yanked the half-dead reptile out of the boys mouth and killed it, she said.

"When he pulled it out, Imad started crying," she said, describing the snake's head as "very badly chewed" when it emerged from the boys mouth.

They immediately checked the child for any bite marks but found none, with doctors at Rambam hospital in Haifa confirming he was unharmed.

"Doctors at the hospital told us the snake was really poisonous but that we were very lucky because they release less venom in the winter," she said.

But Dr Boaz Shacham, an expert on amphibians and reptiles, told AFP that from looking at images of the smashed-up serpent online, it appeared to be a coin-marked snake (hemorrhois nummifer), a non-venomous species which resembles a viper.

Such snakes grow up to 1.3 metres in length, he said suggesting it was a "very young" specimen.

"It probably didn't bite the child because of the cold," said Shacham who is the head of the herpetology collection at the Hebrew University of Jerusalem.

"They are not really active in winter."